HETSTAINE
Working on the Warspite made me decide i needed a better base than the supplied plastic stand. After much net research i came away with a lot of ideas and ways to go about it, and a ton of different products that could be used. Foam, clay, gel mediums, toilet paper, cotton, plaster, aluminium foil, glass, water colour paper, silicone, oats..yes, even oats! I decided on what i thought may be the easiest and cheapest way to achieve the effect and just dive on in. Behind our local shops i grabbed a bunch of different sizes of foam from a recycling bin as a starter, key word, cheap (free!). Ordinary every day hard white packing foam, a couple of different thicknesses and lengths. The Warspite model is a full hull so it has to be sunk into the base, one thinner section of foam for the top water portion, about 2 inches thick  and a 6 or so inch thick more solid piece as the actual base itself. This may all change depending on what i learn as i go along.

I laid the hull out on the foam and traced around it then removed the ship shaped piece, this is what i would use as my first test version. I didn't want just a plain looking flat water style and had decided on some swells to go along with the waves. I want a busy looking Atlantic ocean, not a still water vibe. To create the swells i simply held the foam up and used a lighter held a foot or so underneath to melt them in, going in a diagonal direction as to what the waves would be. (there will be a shot of how the swells turned out further down) Next up all i needed was some white wood glue, PVA or similar, and some toilet paper. It's as simple as a thin layer of glue over the foam and then laying down single sheets of toilet paper firmly on the foam until it is covered. From there i covered the paper with the wood glue, a fairly generous coating, and left it overnight to dry.

Once dried i used a base blue colour, cheap acrylic from the dollar shop, also laid on fairly generously and let it dry for a few hours. The toilet paper ripples up quite a lot once set originally with the glue and even at this early stage you can start to see how one can achieve the intended affect.

From here i mucked around by putting some more wood glue on and letting it sit for a few days to see if i could achieve any sort of depth once it had dried, which is sort of did..and sort of didn't. I didn't have any sort of clear acrylic medium, gel products or sculpting medium that i could use without having to fork out money so i decided to raid the food cupboard. I mean, one guy, Chris Flodberg, does these crazy mad water bases with oats!

So out came the flour, mixed with water, wood glue and some tamiya acrylic green and grey. I made a fairly thick mix and went to town applying it all over the base attempting to see if i could slightly sculpt it or least get some sort of effect. No joy, it wouldn't sculpt and also did not like sticking to the glossy glue base. When it was nearly dry i did have a little bit of luck pushing it around into some areas and getting a bit more of a messy and random look to the softish looking waves i currently had. Once that mix was dry i made up a lighter grey green mix and hand painted the tops of the waves to try and replicate some small breaks and windswept water. The finisher was an even lighter mix of the same colours and then adding highlights to the top of the waves and dry brushing ripples and any raised section of toilet paper. It was just paint as you go, make a mess and see how it turns out.

The way the flour goop had dried was like mud in the hot sun, lots of cracks as it seperated whilst drying which let some of the lighter blue underneath show through. This was unexpected but a nice surprise as it gave a lot of colour variation but would have worked better with a darker black/blue/green as the base instead of the bright medium blue. Still, overall it was looking fairly decent but very static as it had no depth to it.

Lastly is to try and add that depth. This is where you need a gloss product, of which i really had nothing to do the job, excepting some Kristal Klear product that i had used on my Warspite floatplane windows. Out it came. I laid on a mix of about 70/30 Klear/Water in a semi thick coating and worked it in so there wasn't any dry spots and once again let it sit overnight under some lamps that i hoped would help it set a bit quicker and evenly. The result is not as good as i hoped, the main reason was the colour change and that it sort of looks like it is coated in glad wrap. Being a test run i didn't want to waste any more of the Klear seeing if further thinner coats over a few nights may achieve a better result and decided i need a better product for the depth and wet look. As it stands it was well worth doing and i got enough out of it to be pretty confident in moving forward and making something reasonably effective. The lighting in this first pic makes it appear worse than is, but as promised you can see the swells really good at this angle. 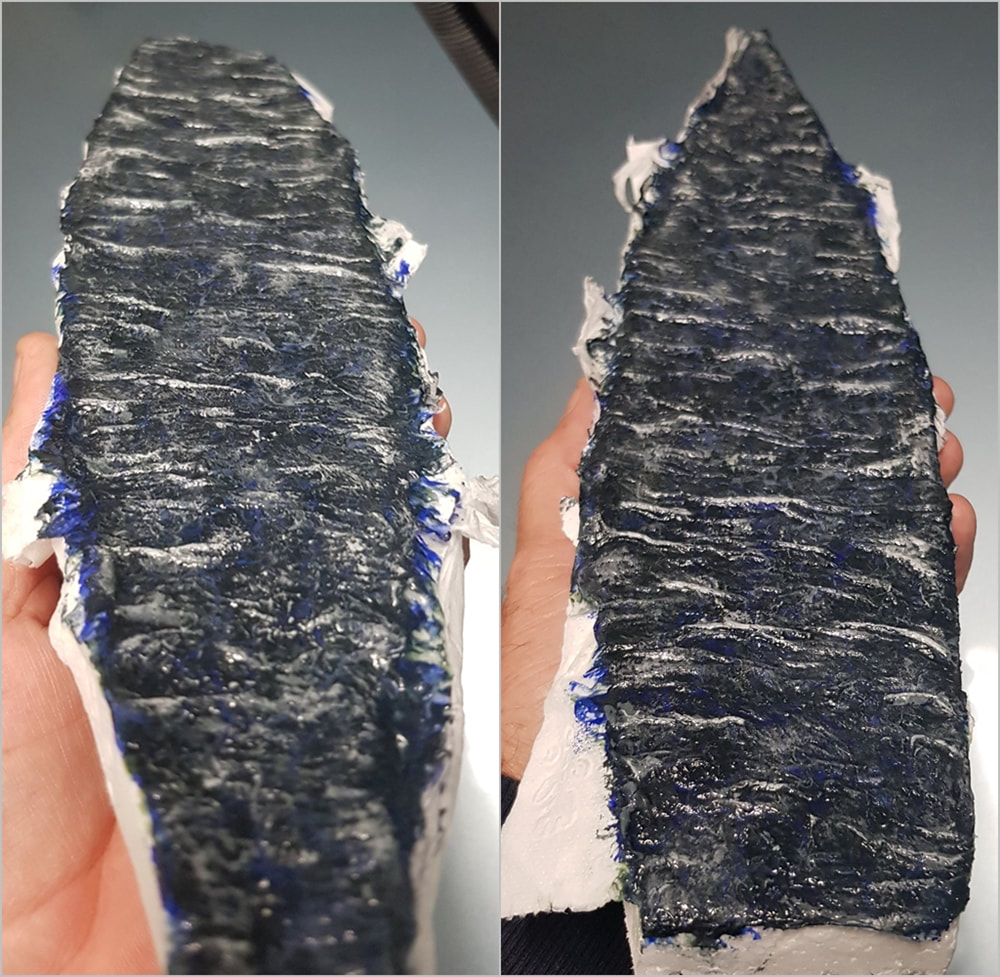 Test 2. Iwas pretty happy with my initial effect but once cleared it looked rather rubbish so I ordered some Vallejo Still Water and Vallejo Water Effect after watching a bunch of YT vids and trawling through ship building forums. 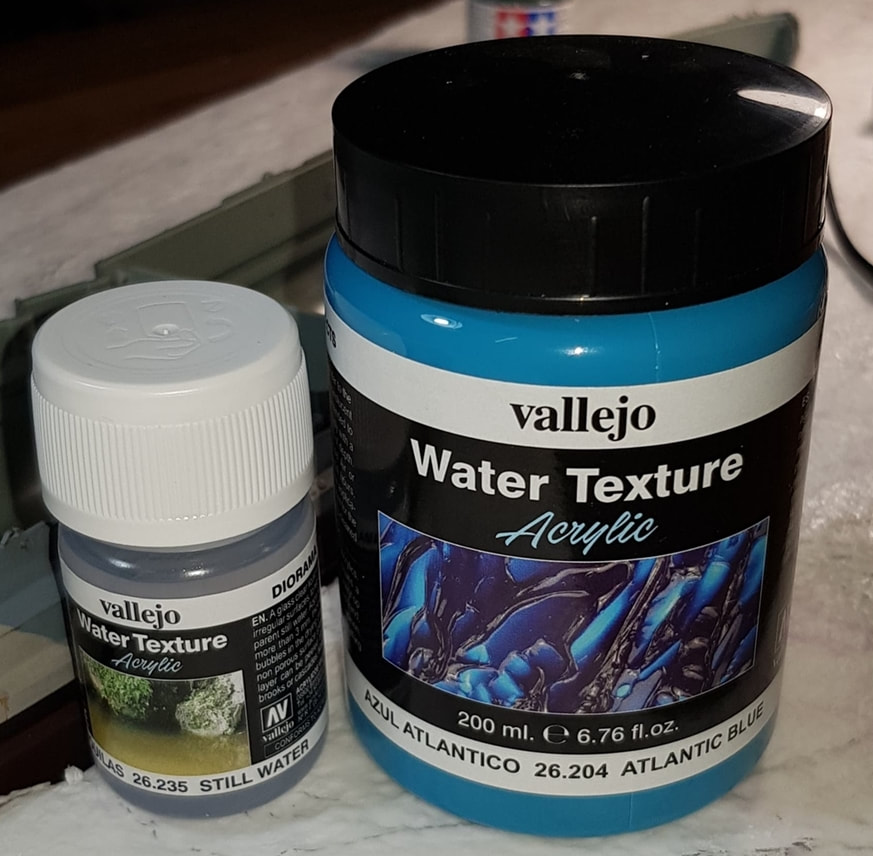 This time i used a smaller square piece of foam as a test piece. I also didn't use any paper, just melted some shapes into the foam with a lighter and painted a royal blue base colour. Once that is dry i brushed on the still water which dries clear, i was meant to do a few applications of the still water to achieve some depth by separating the base colour from the top coat of the water effect but in my excitement to finish only did one. The water effect is a thickish paste and can be mucked around with for a while for a lot of variation.

So with a combination of these methods i was ready to have a crack at making my full size dio. A large piece of foam cut to size and doubled up for strength was to form the base. I went over it with a lighter to form a base for the bow waves and some lower sections of water and then gave it the toilet paper and glue treatment, let it sit overnight and sprayed a green/blue mix.

The bow wave and some other areas got some highlights added by lightening the original green/blue with some light grey and a smidge of white and then two coats of the still water with 24 hour drying time in between were applied. Once dried the first layer of water effect was added, all over thin with some built up areas at the bow wave and other waves i picked out randomly. The stern prop wash was the thinnest and dappled on with the end of the brush. I had some decent sized gaps either side of the hull and at the bow so the whole lot was stuffed with ripped up paper and a water/glue mix added in between layers. At this stage i had drilled and bolted the hull to the base which was now set on a piece of mdf board.

The ship is sitting together unglued as i wanted to see how it was looking overall. Not bad huh for a first timer huh? Once the paper and glue mix is dry i need to match and blend the paint, apply possibly two more coats of the water effect and then lightly build up the foam/white caps for the waves and flesh out the prop wash. When that is all done i can knock together a neat piece of varnished wood for the edge and then get back to building the actual ship! Like stated, from here it was just adding more effect and stillwater layers, building the base and detailing the waves. Instead of covering the finishing result across two different  build pages i'll refer you back to the main Warspite build page to see how it finishes off. The above has covered all of the basics which really are the hard yards.