HETSTAINE
The Skyraider started life as the XBT2D-1 prototype and made its first flight on 18 March 1945. By December 1946 the designation was changed to AD-1 and it began being taken into service with the American Navy replacing it's Curtiss Helldivers. The last Skyraider in American service was handed over to the Republic of Vietnam Air Force in 1973. The Royal Navy retired theirs in 1962 but several were still flying with the Swedish Air Force into the late '70's. Not a bad life span for a prop job that has it's roots solidly locked in the WWII era.

Sarcastically nicknamed the Spad (by the jet jockeys) after the WWI French wood and wire biplane, she is a truely classic airframe. Big and brutish and able to carry a ridiculous amount of ordnance, she has always been a model i have wanted to build ever since my Dad knocked out what i thought was the coolest model kit ever in the early '80's. Being a Tamiya kit i expect the fit to be their usual top quality and i'm hoping the biggest challenge will be deciding on the plethora of supplied options that i can hang under her wings.

Here's the real deal, notice the single Mig kill under the cockpit, you can read about Spads v Migs here - Part I, Part II. 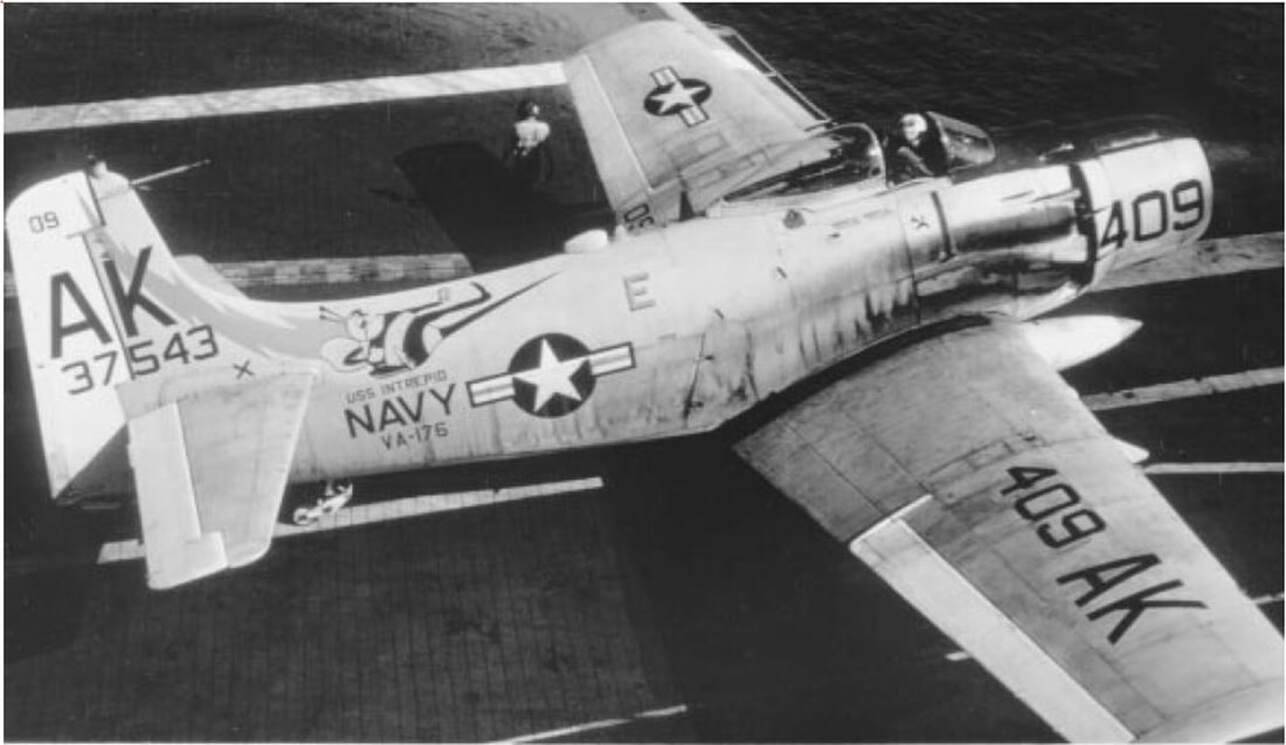 The cockpit and pilot. Very basic piece of kit, satin black with dry brushed aluminium highlights, some knobs and buttons picked out with yellow, red and white and a supplied decal for the instruments. For once i wil lbe sticking a pilot in the seat as i want to do this model wheels up and in the air. I am generally terrible at figure painting but hopefully a light wash and some pigments will add some some detail to my bland effort. 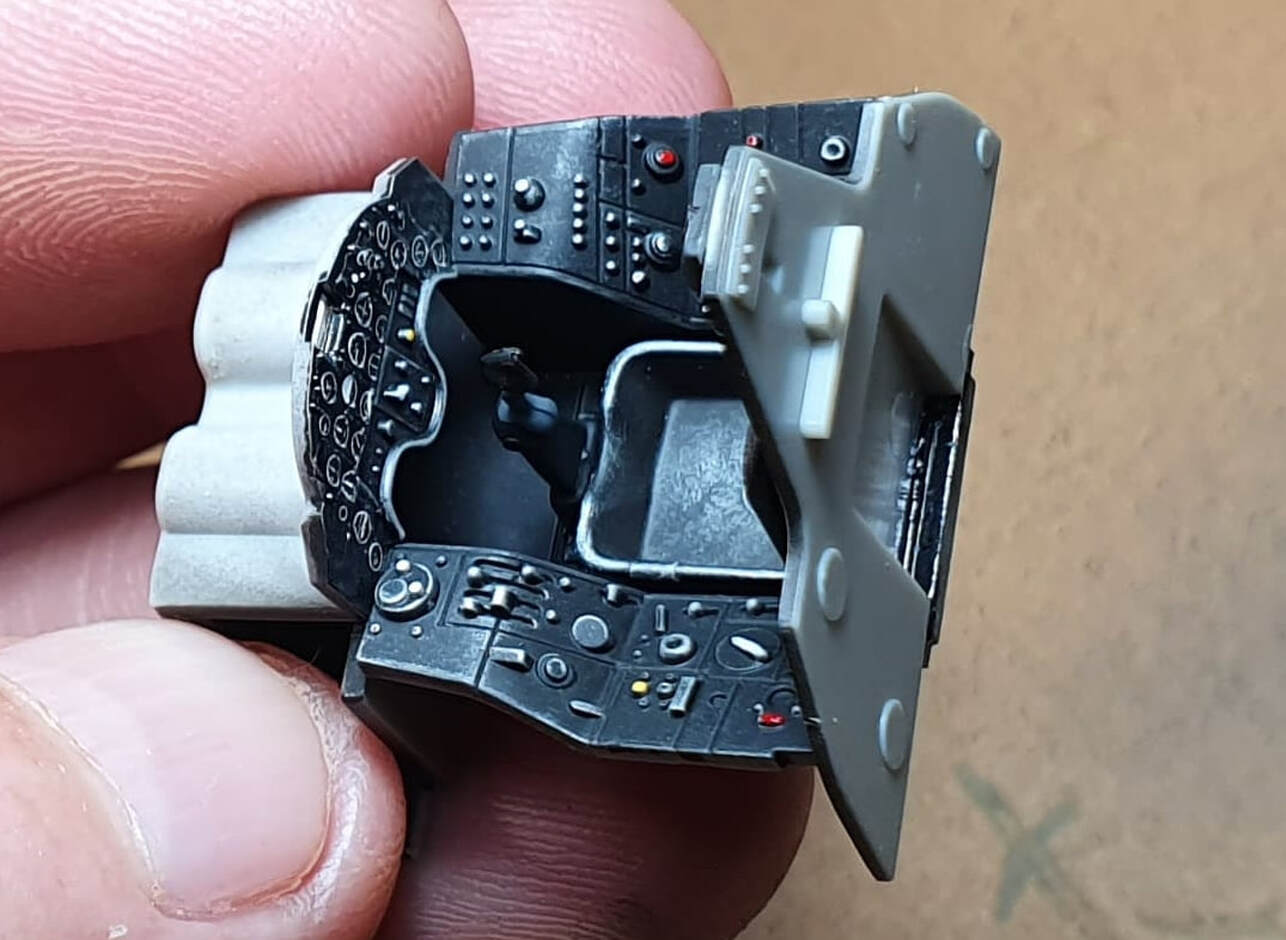 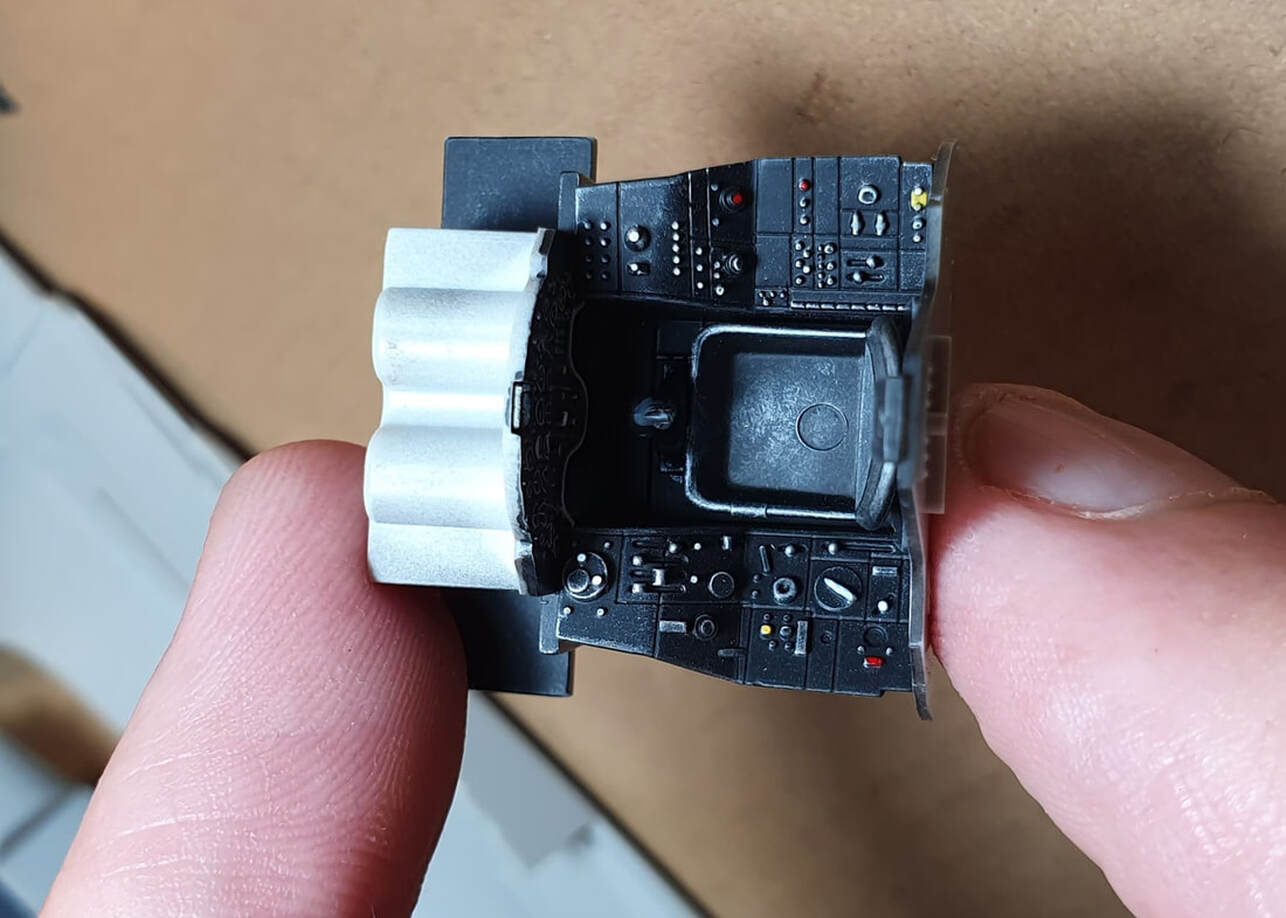 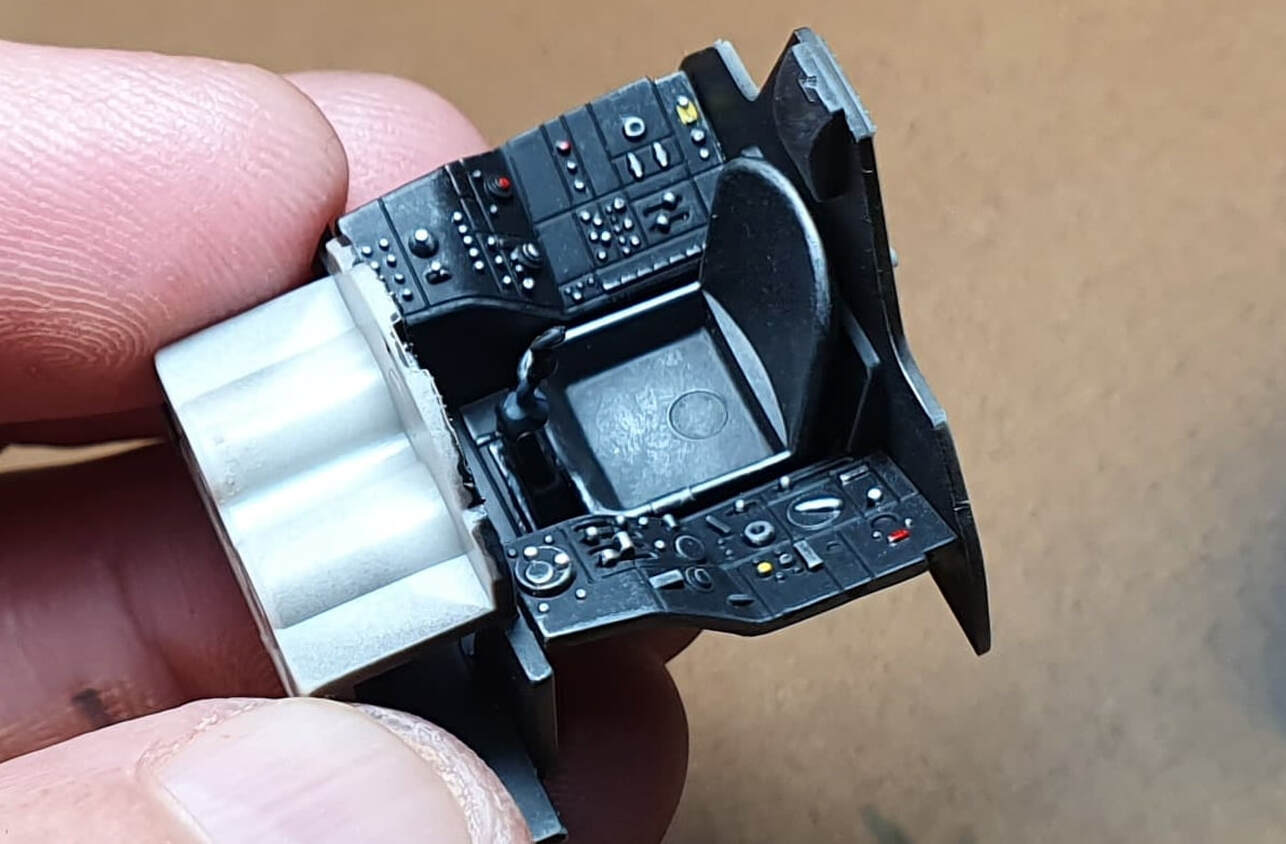 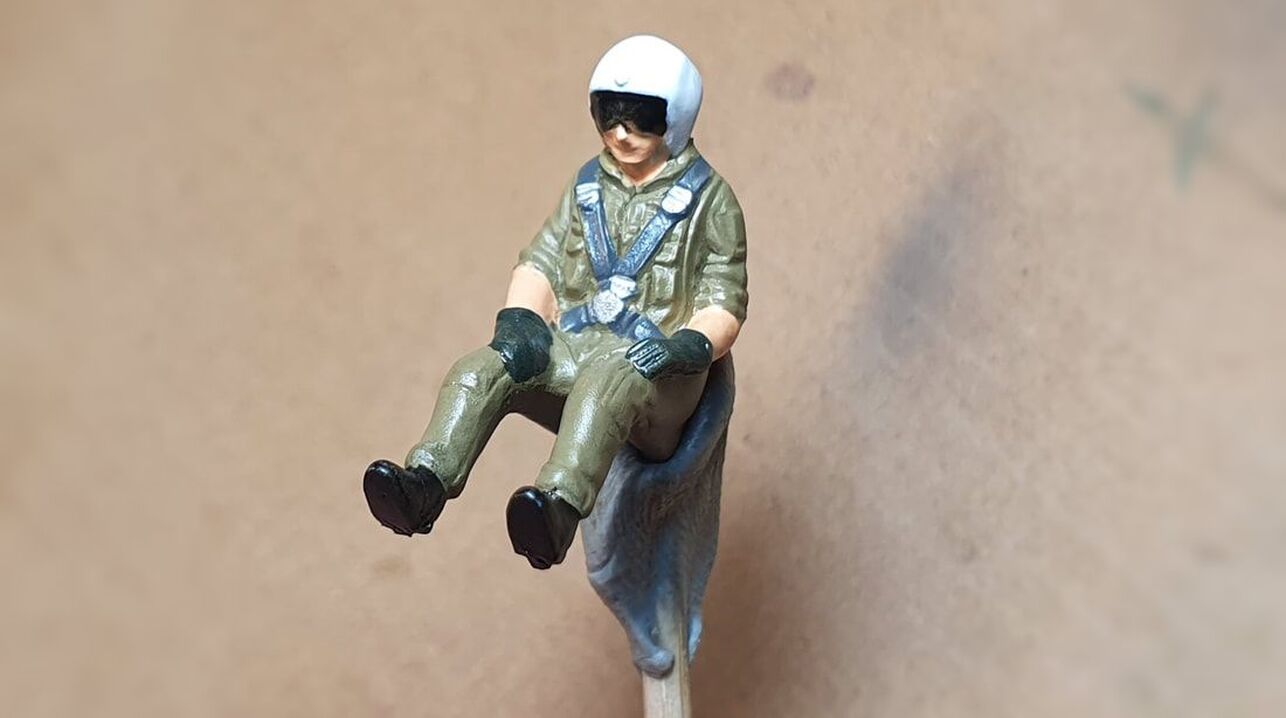 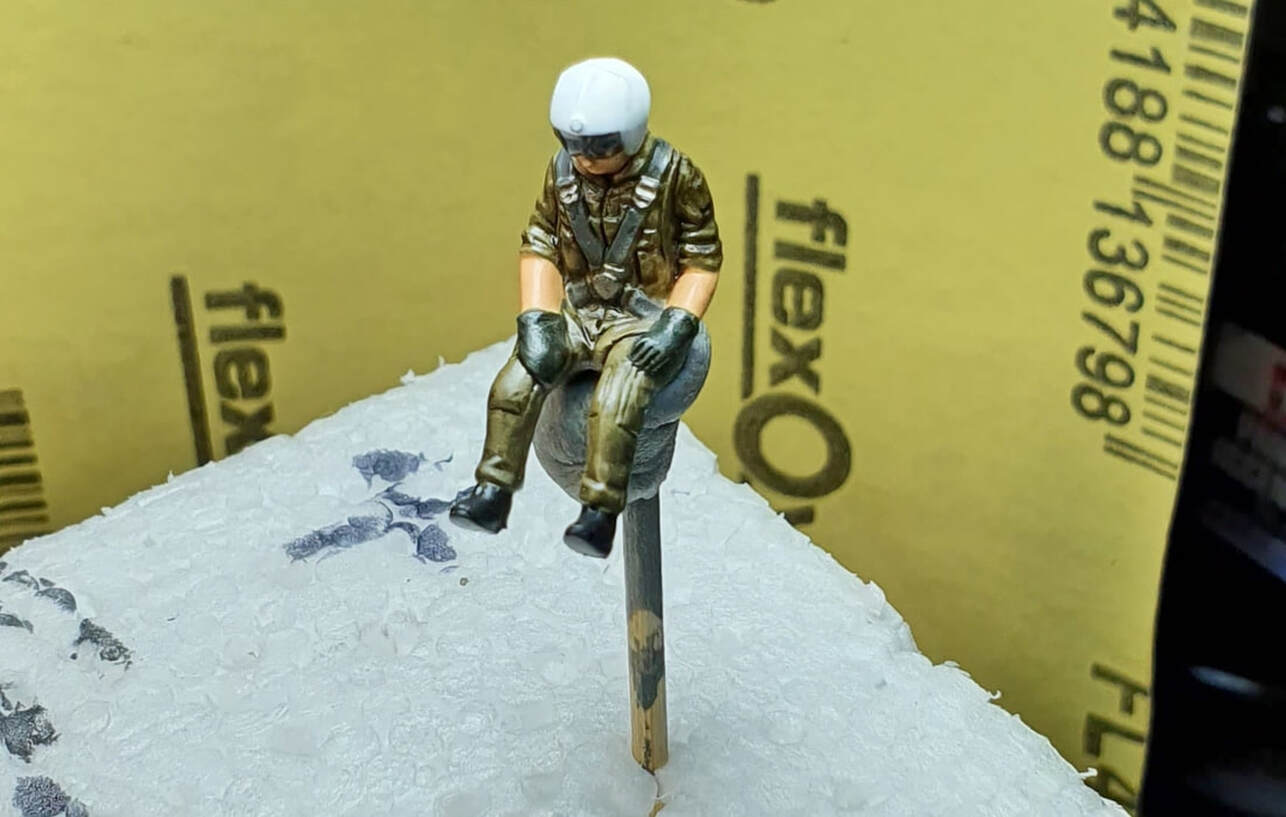 The two halves of the fuselage and wings, top and bottom fit perfectly on a test fit. The interior of the pit was painted with Tamiyas XF24 Dark Grey. At this point i did a comparison between the Douglas Dauntless and Skyraider as i find the size difference between just a few years of war experience amazing. Especially with the Dauntless being a two seater craft. 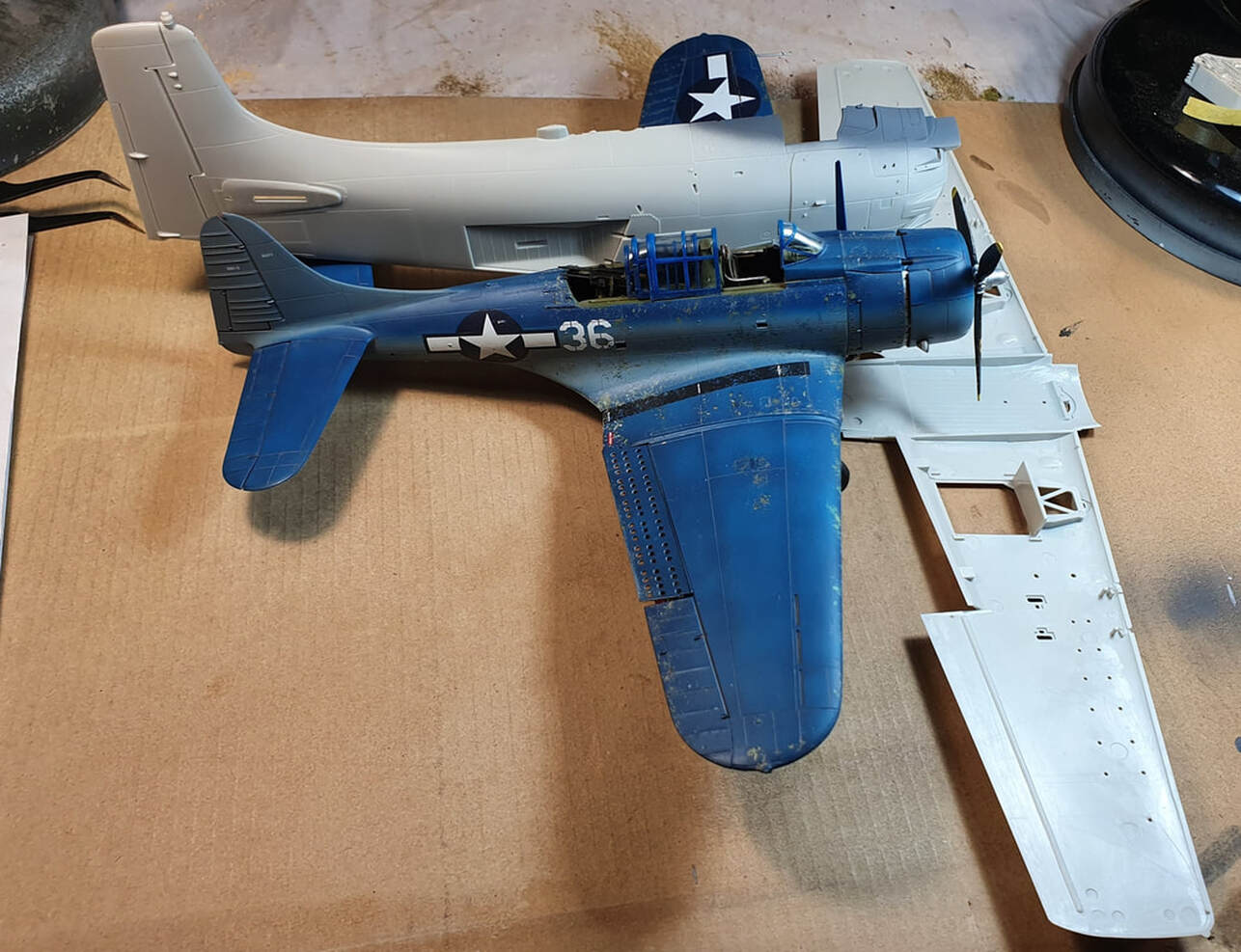 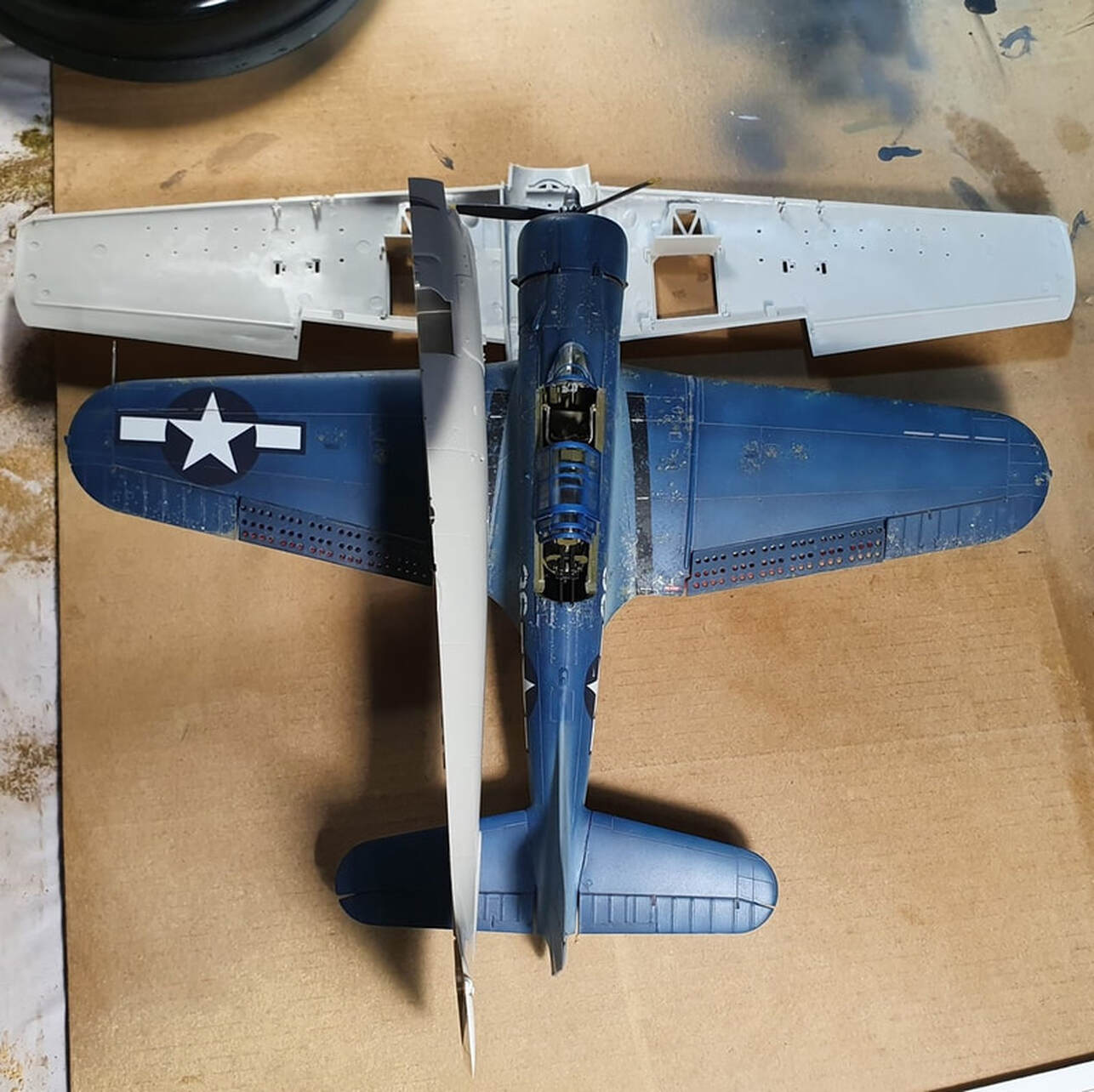 It was at this stage that i decided i wanted to display this model wheels up and in the air. I will be going with an ocean base that i hope to be able make so it appears as if the model is at speed as it flies low over it. First up was to cut a piece of wood and decide the position of the plane. 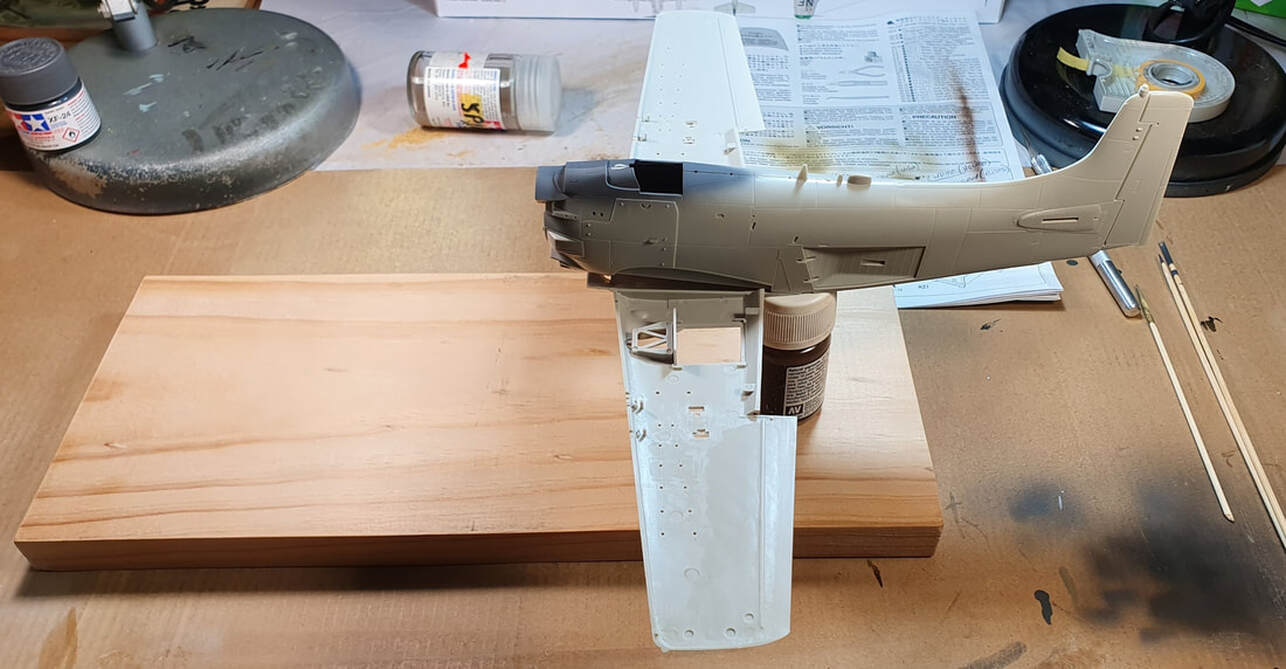 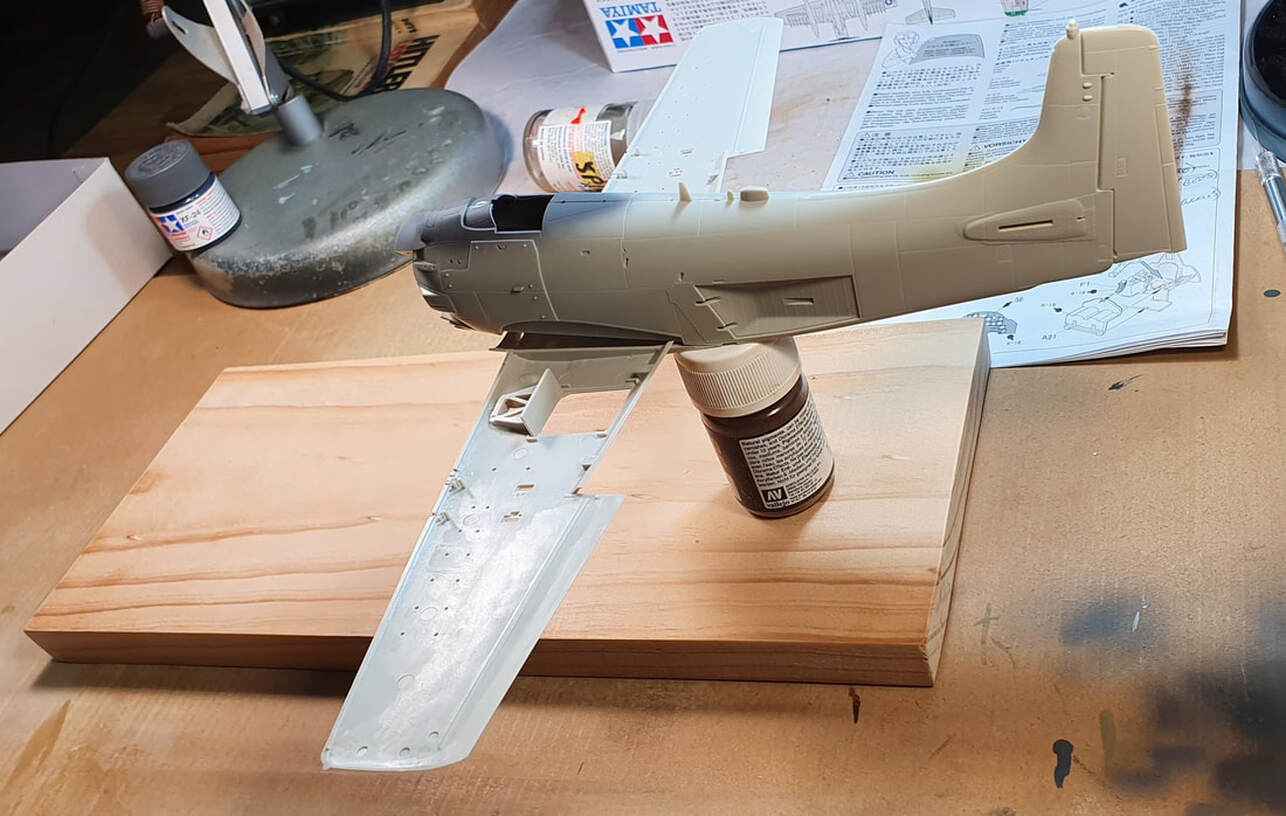 Next is finding the centre of gravity and the appropriate rod. Even if i place the rod further back, like in my rough drawing where the blue is the rod, i should be able to add enough weight in that area of the fuselage as to make it the centre, I'm hoping the local curtain shop has some clear window blind rod in a decent thickness, possibly 1/4" should do the job. The crossed out inner dive brake section won't be used as that is for displaying in the open position. 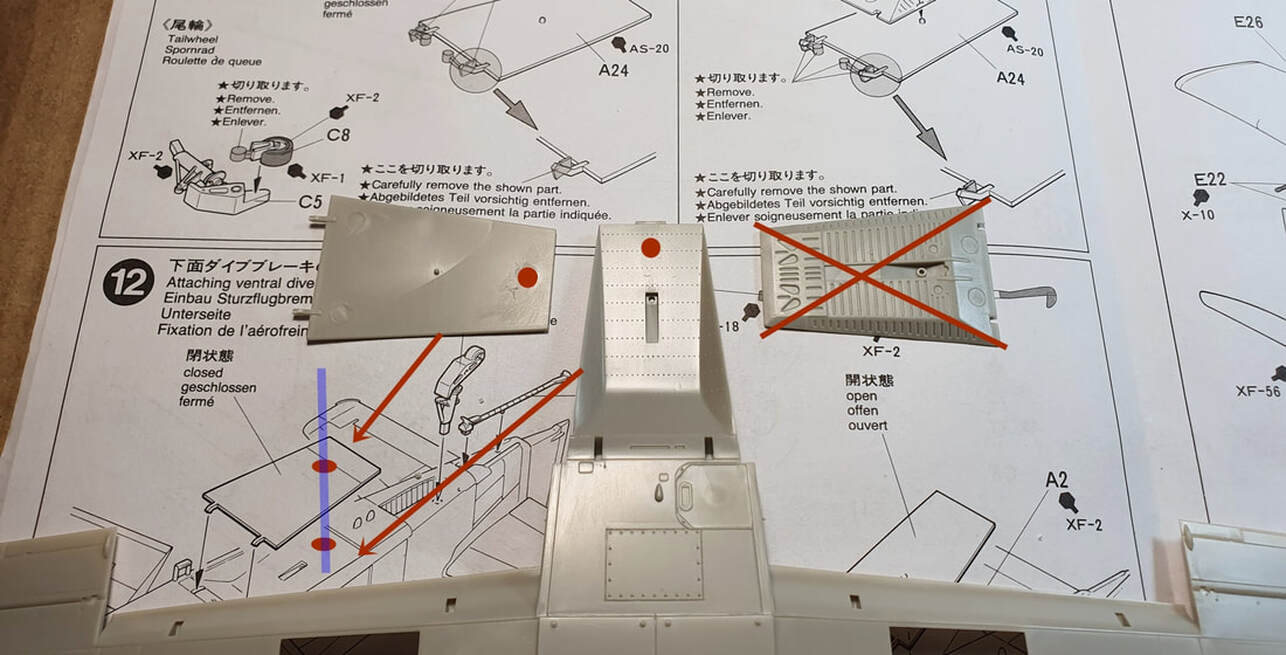 Until i can pick up the rod i started playing with the ordnance, i'm fairly sure i am going to go with a dumb bomb load out accompanied by fuel tanks. The HVARs and other load outs are still in with a shot though, so many options! 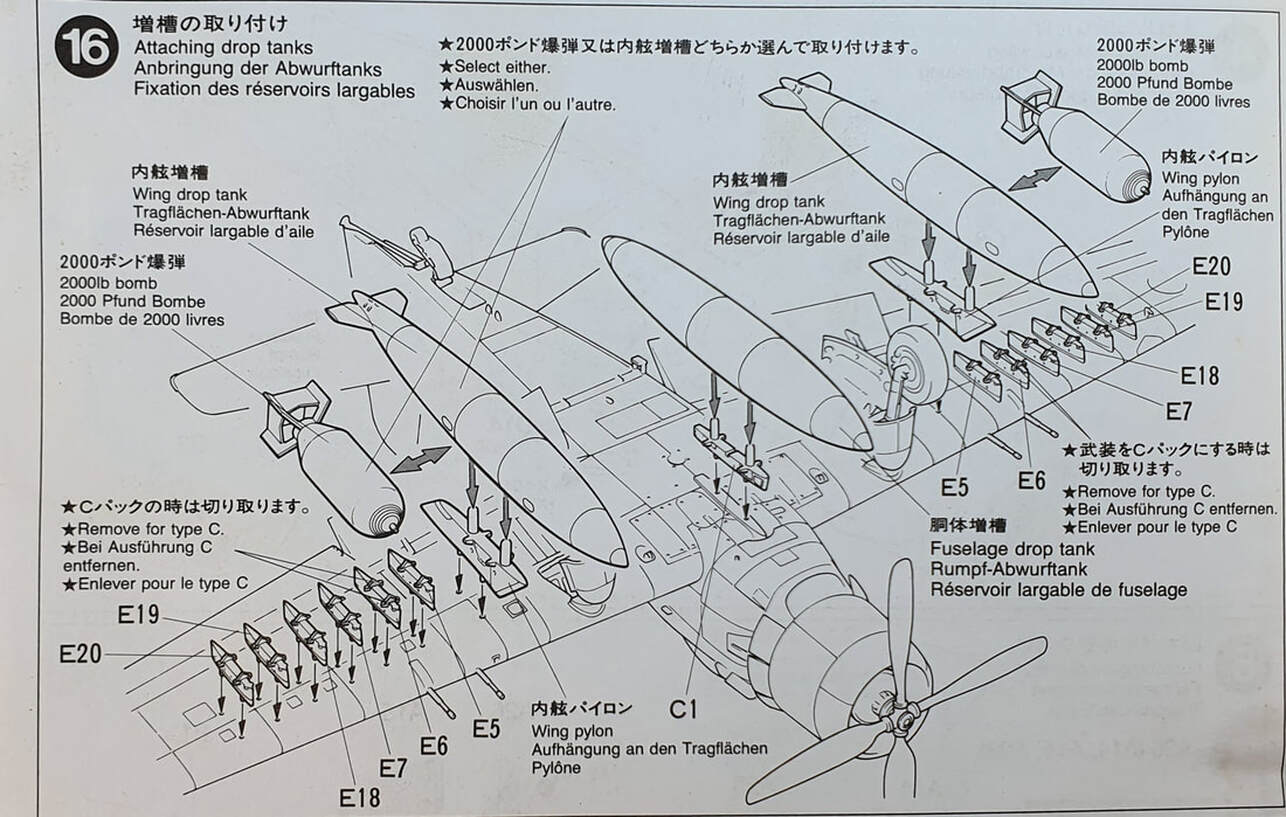 The fuel tanks and 2000 pounders come with a polycap setup to mount to the aircraft so they should be a nice tight fit. The smaller bombs are your standard fare two piece job. Going by the supplied diagram if i fit the 2000 pounders i only use the centre line tank or i swap them out for three tanks in total. I'll paint the whole lot up and see which configuration looks the best to me. 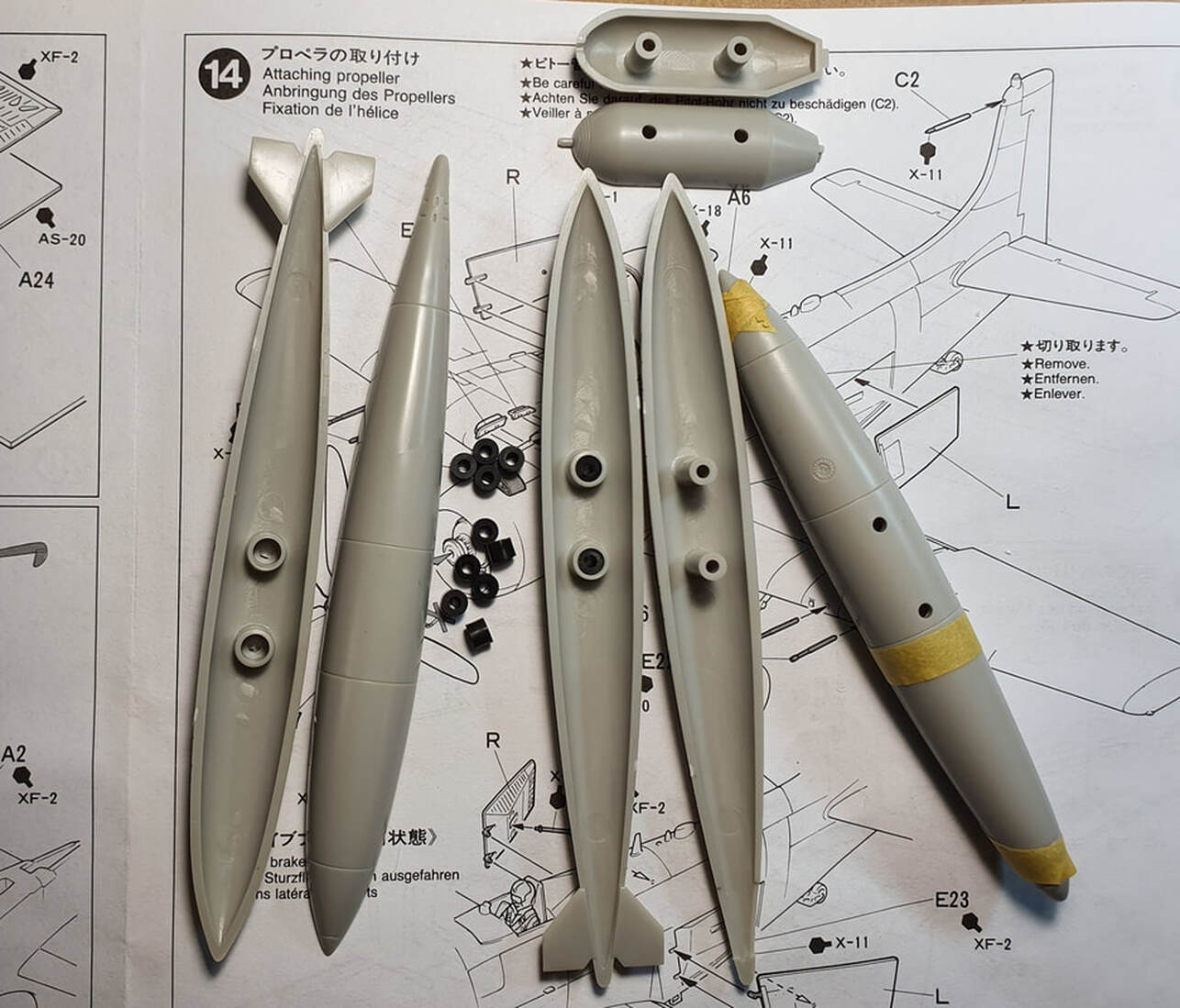 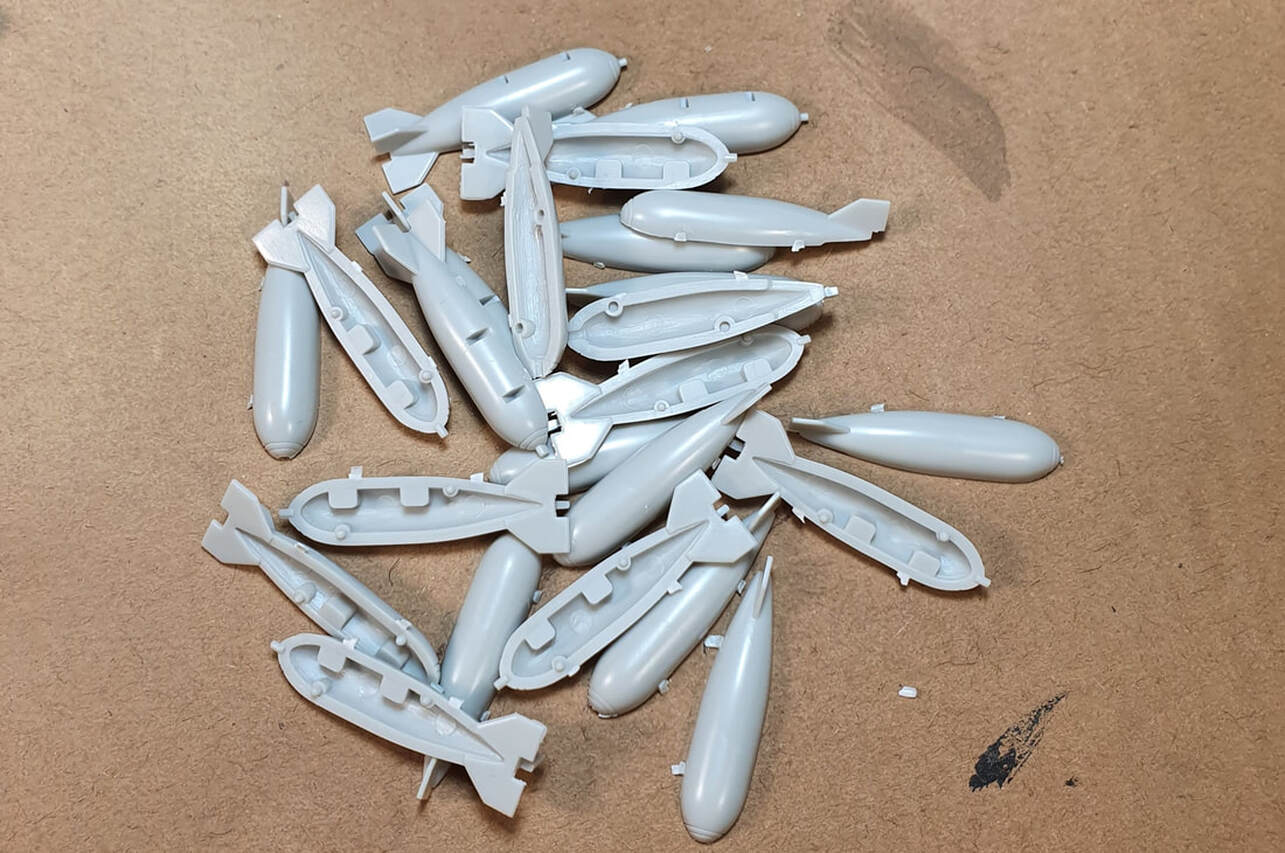 Wheel covers. After a bit of mucking around, trimming etc you can close the wheels up. The covers don't fit the holes and the front oleo leg cover does not sit flush, everything need trimming, sanding and will require some putty work to finish it all off. First up, the undercarriage doors, the hole they need to cover and how they sit in the open position. 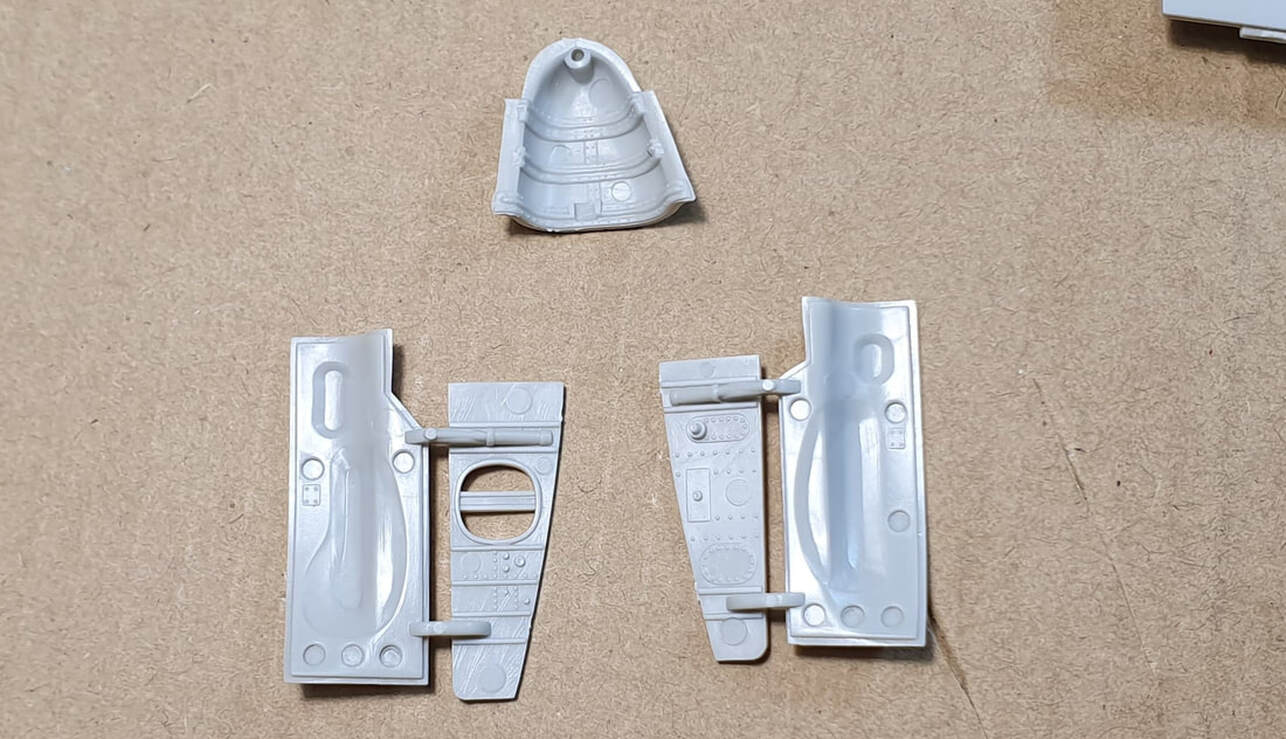 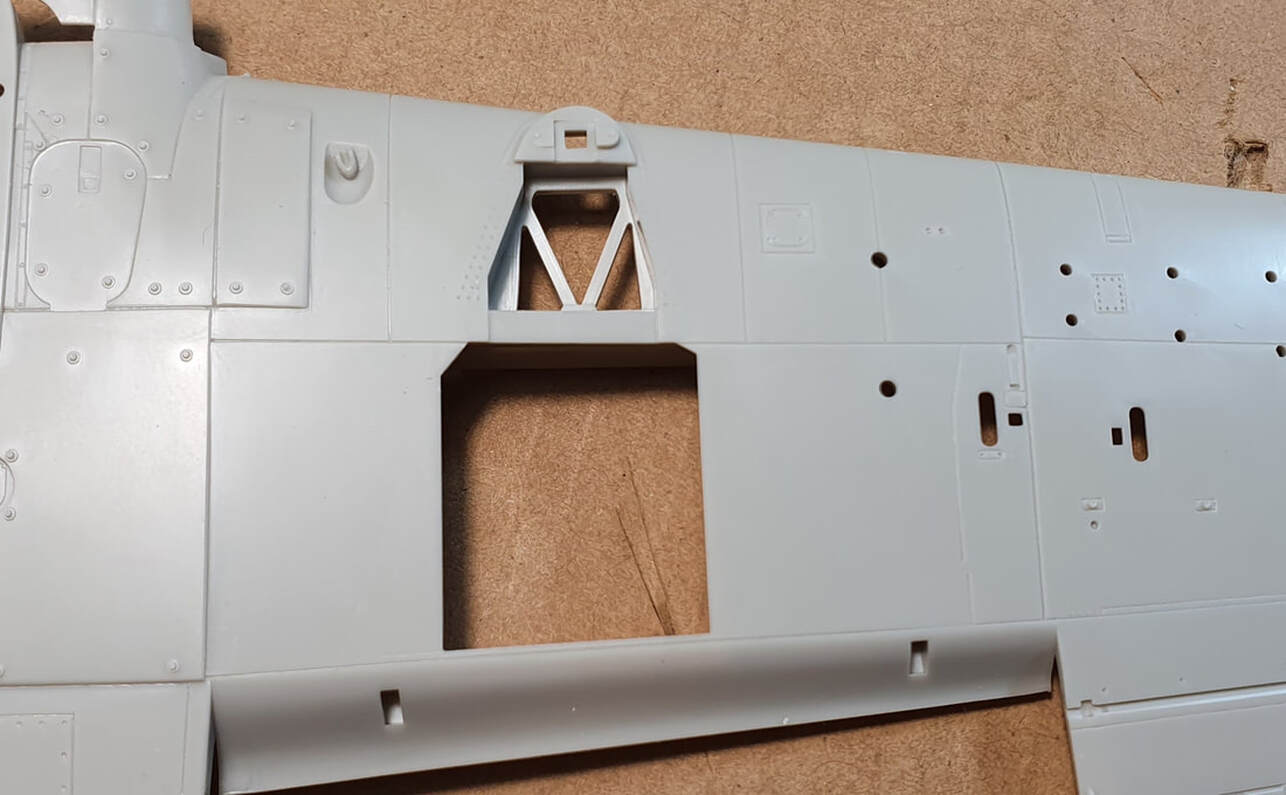 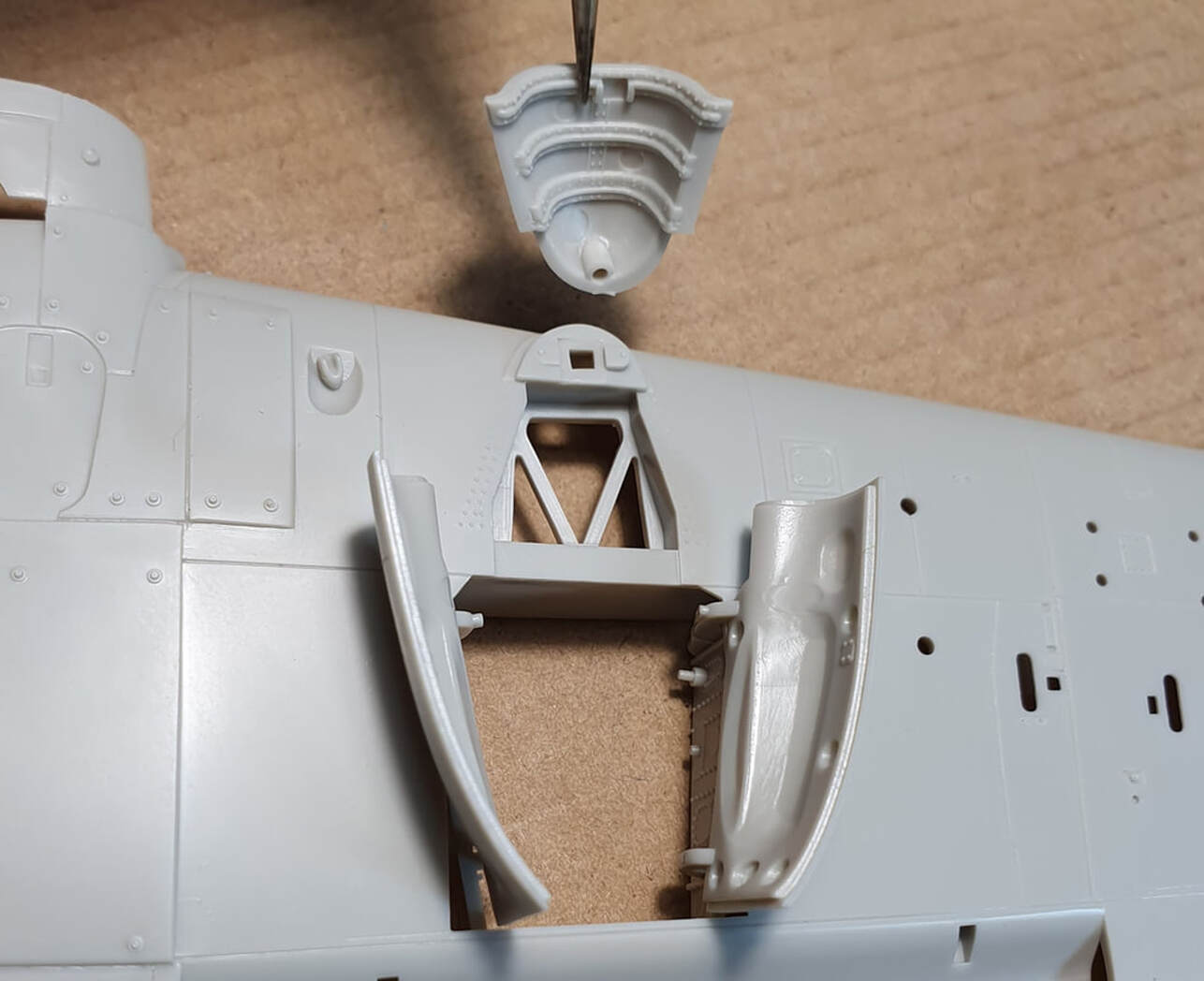 The side doors with the inners removed. 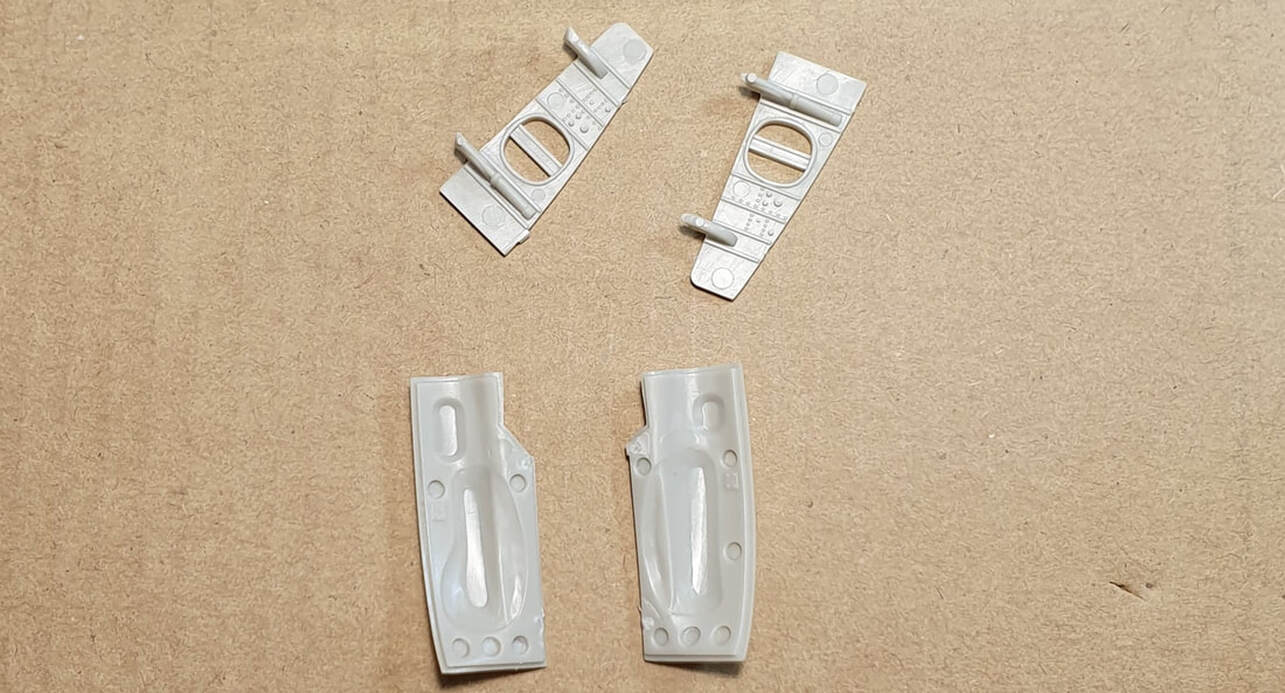 The front cap will need trimming and sanding to remove the protruding detail so it fits flush.  Where it mounts to also has to be trimmed and sanded smooth. 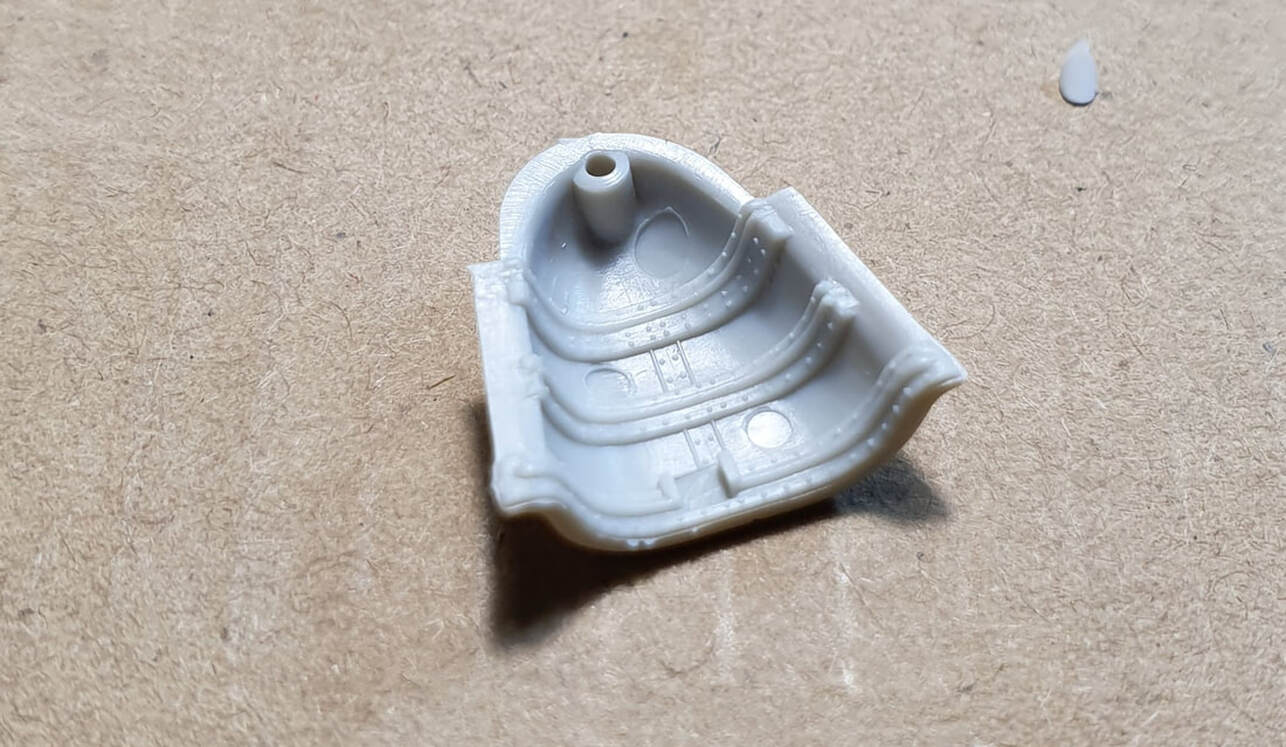 The two side doors are glued together so i can line up the centre line with the front section. The doors are too big to sit neatly in the hole so it's trimming and sanding followed by putty underneath to seal the gaps. Once it is all dry and can start cleaning it up and do some better detail work. 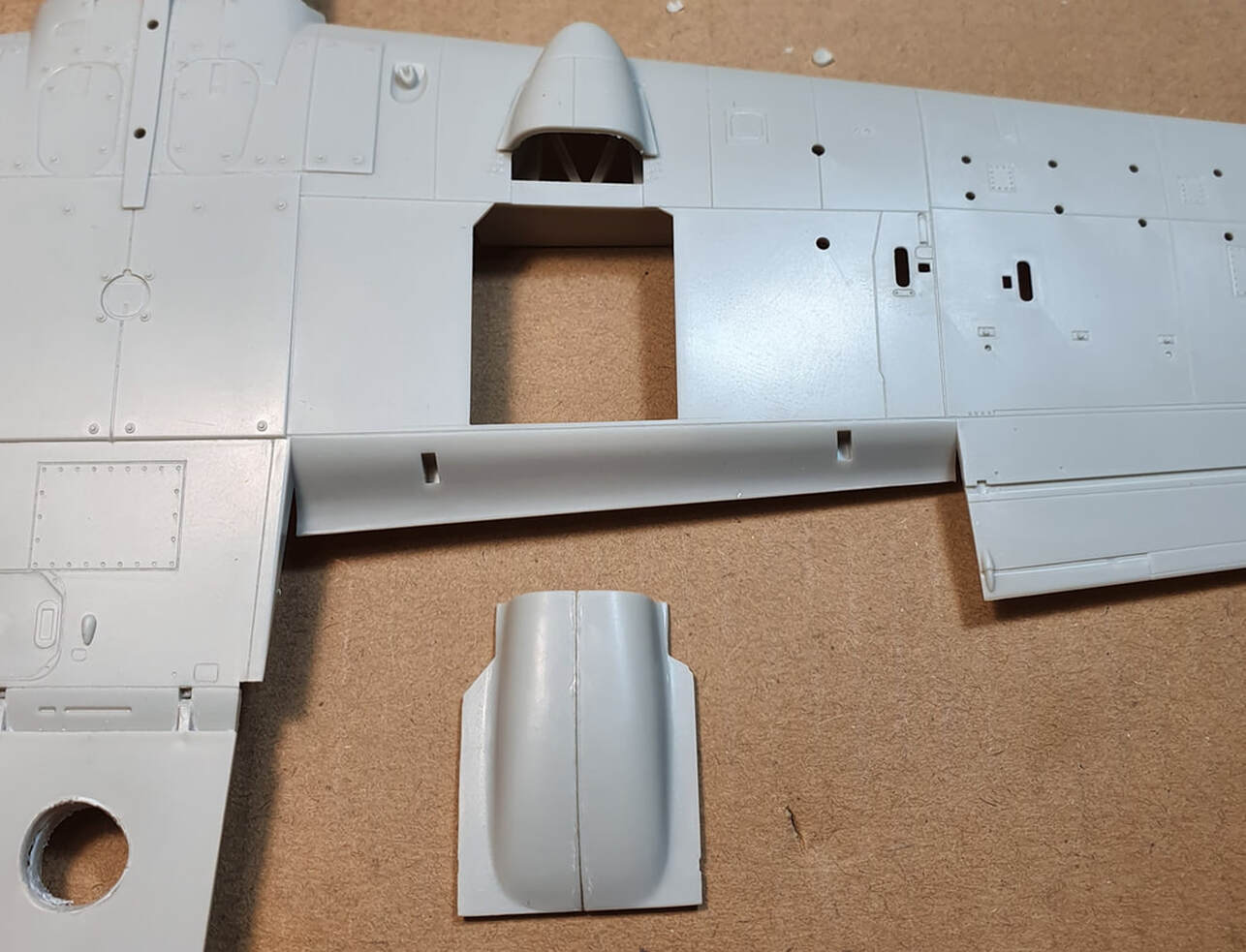 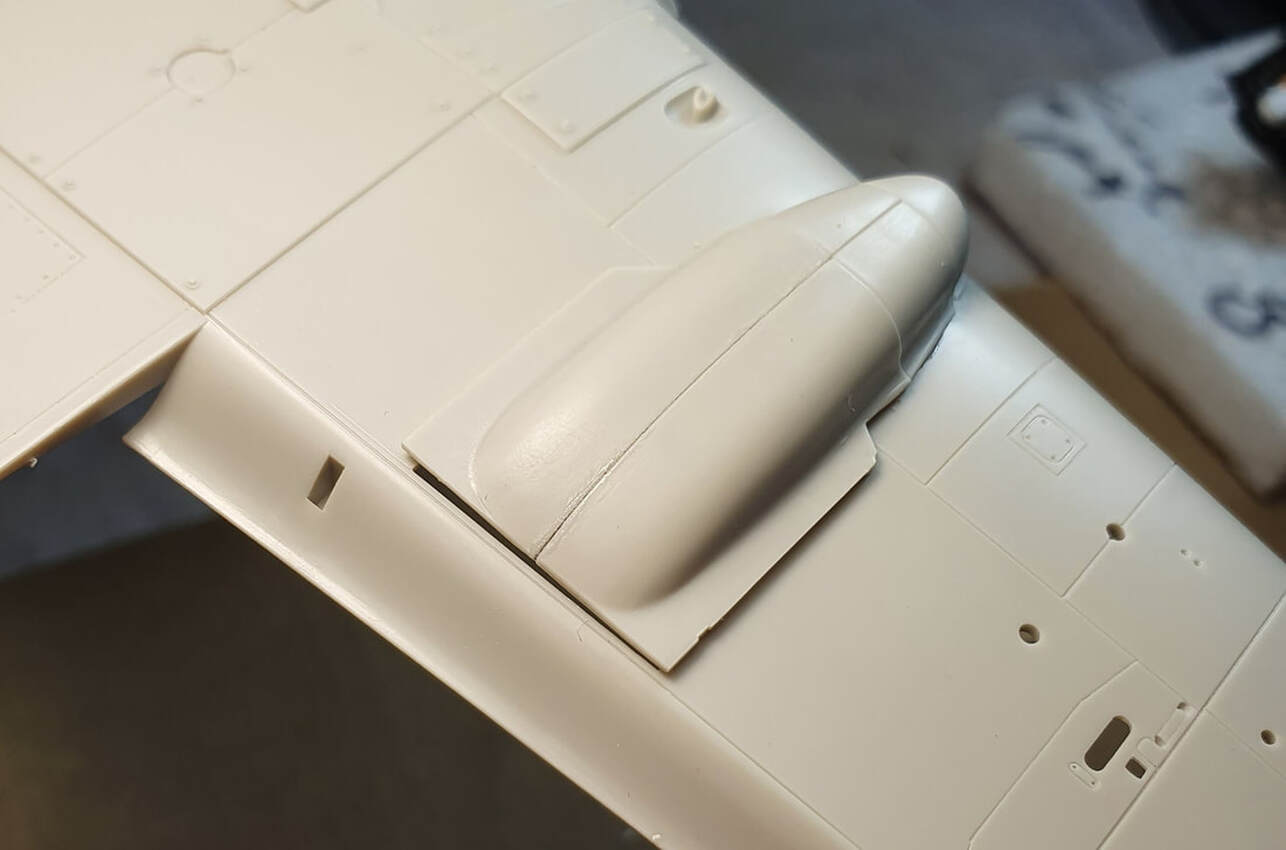 The clear rod i found at a curtains and blinds shop and is called called a 'flick stick' apparently. The lady at the shop said she sells more of them to fish tank owners than people needing it for blinds but this was her first occasion to sell one for a model.  Seven dollars for  70 centimetres, decent buying.

Pilot dulled down and touched up sitting in the now glued together fuselage. I may have to operate on him and seperate an arm so it can sit on the stick.

Back to the wing and undercarriage. Sanding and then putty, lots of putty, well not really..it just looks like it. 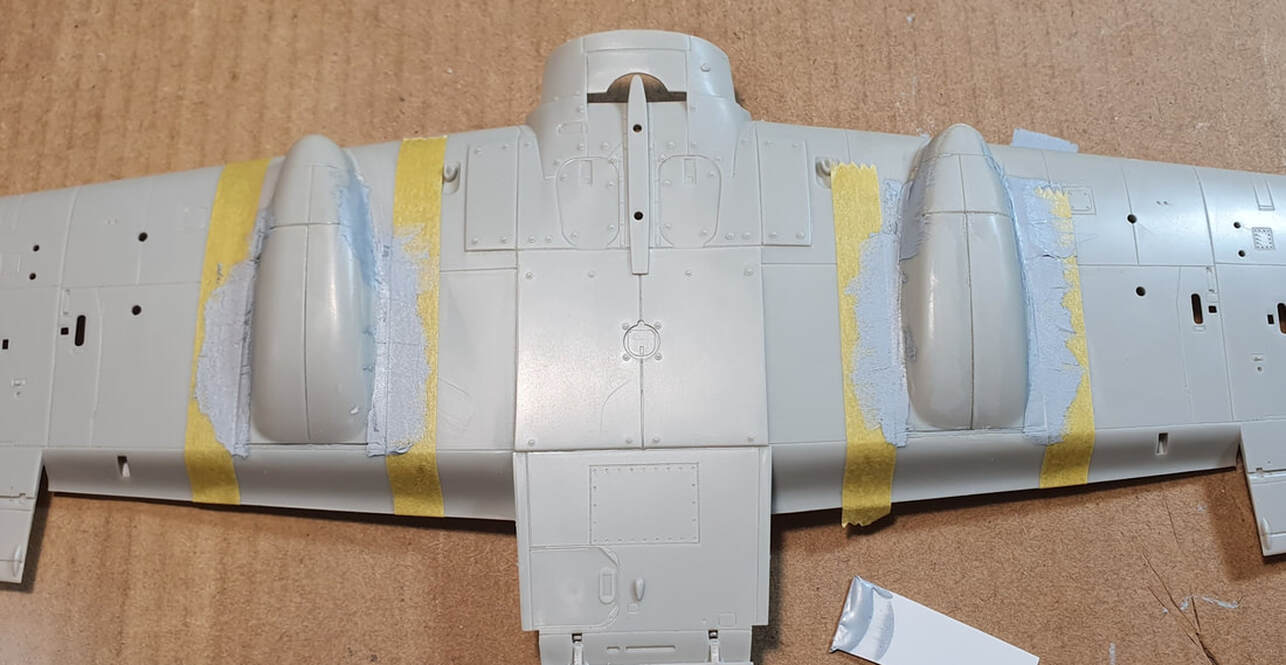 Sanding makes a big difference, she is almost flush now and the gaping holes at the font are nearly gone.

A quick shot of primer so i can see where it stands. Some more putty needed in a few spots but she is getting there.

Back to the loadout. Primer, preshade, silver and then the OD. I'll do one coat of the OD and then some salt chipping with a slightly different mix of OD over it to add some age. The bombs were leftover WWII ordnance so they should have a bit of character about them. The silver really showed up the seams so the tanks and bigger bombs needed filling and sanding and respraying, thankfully the 250 pounders only need a slight sand. The engine got thrown into this mix as well for it's first coats and then was dirtied with a light wash, some engine oil and engine soot coloured paint. It will get a little bit more love yet. 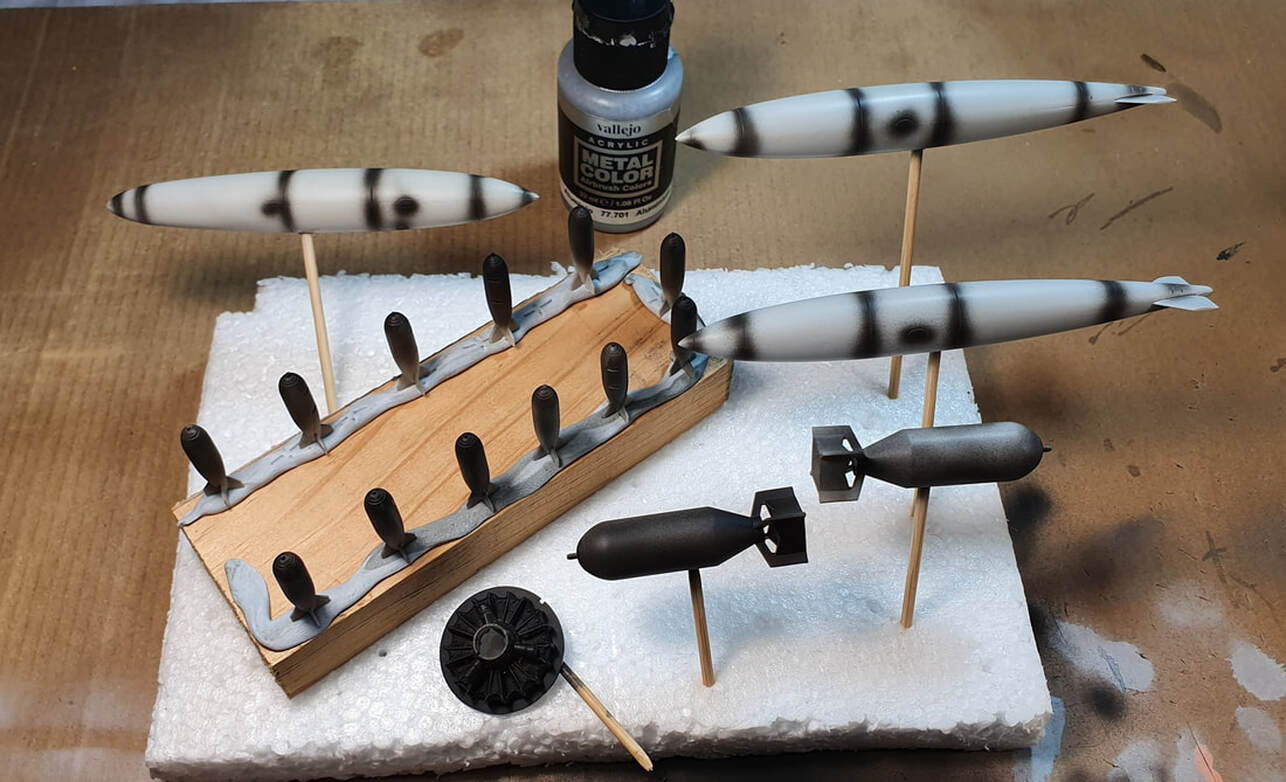 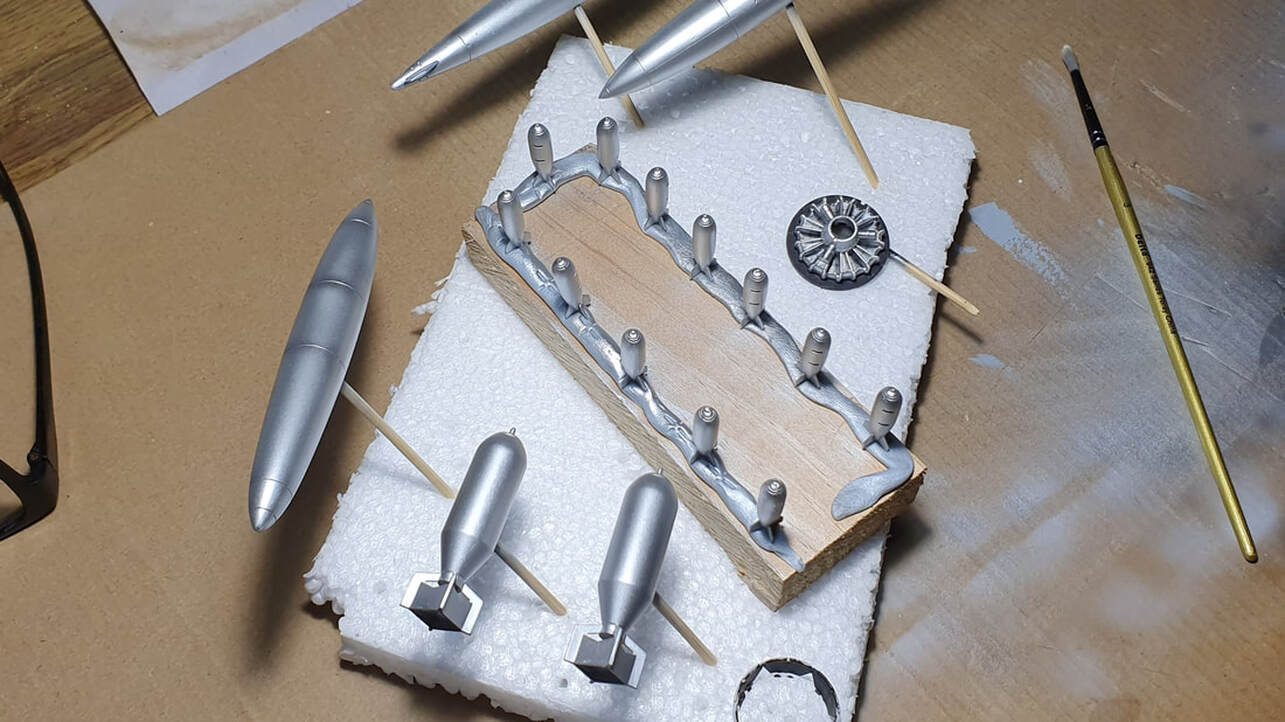 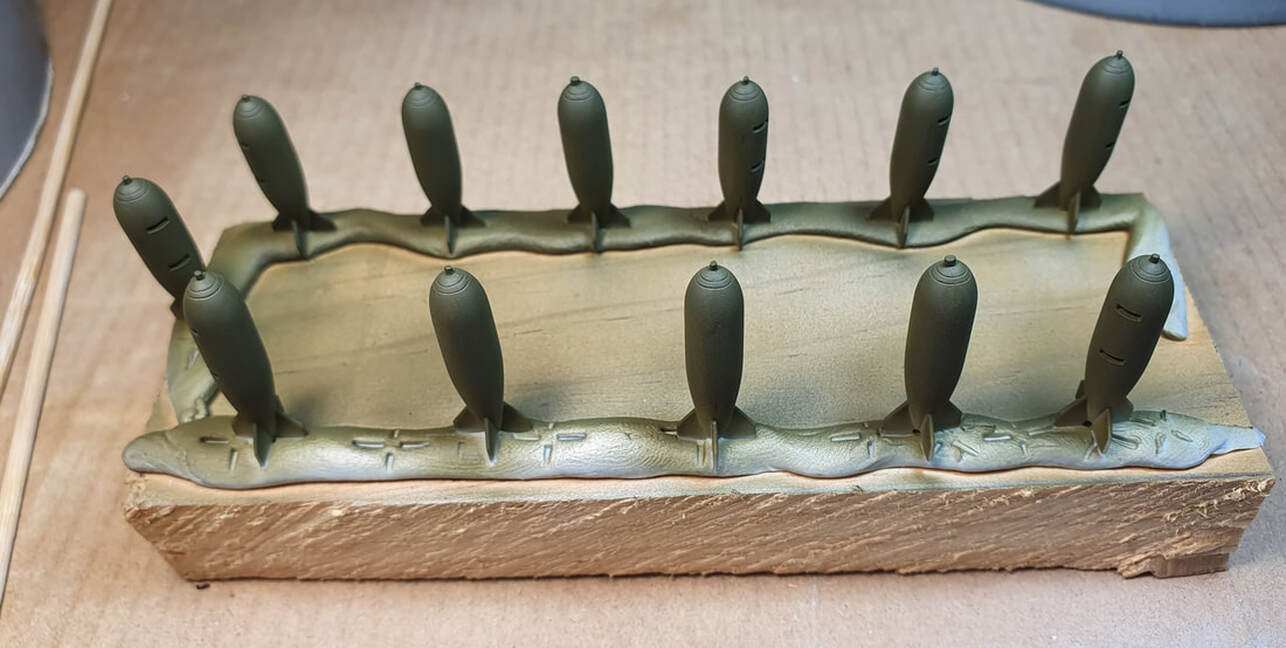 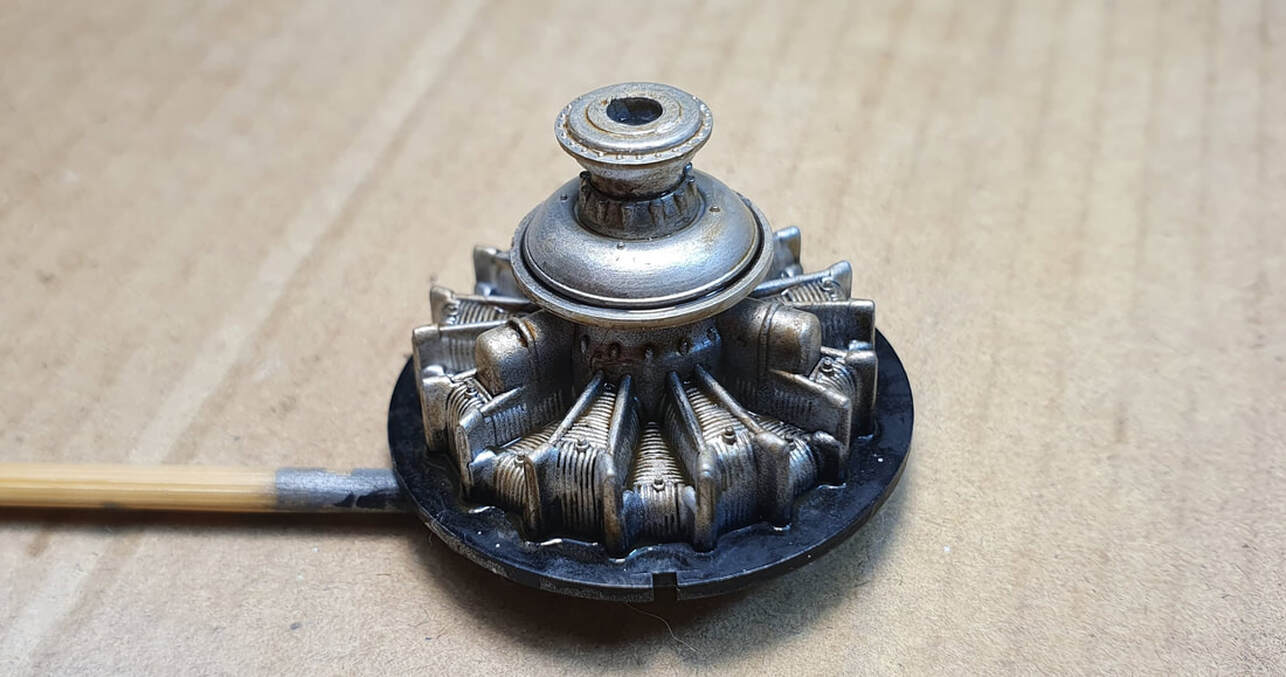 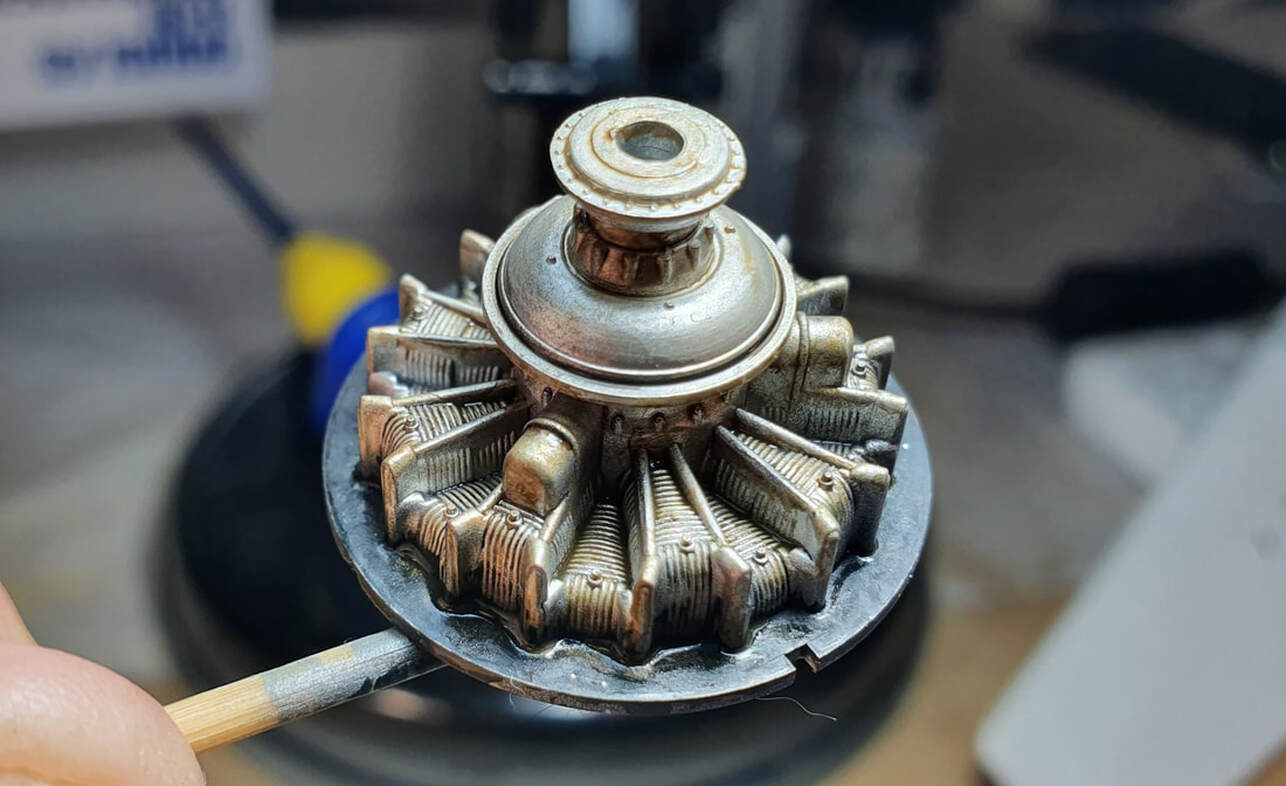