HETSTAINE
Salt time. This was were i would either learn a new technique or just completely destroy my paint job, fun times! First up i hand polished the silver with a cloth to get myself a smoother surface and lightly sanded the wing joins. One side smoothed out in this pic. Then wet down the inner wing sections and started laying the salt let it dry under my lamps and then painted the yellow/black mix undercoat. The whole process takes a bit of time as you are constantly waiting for sections to dry before being able to move on.  The model was tilted and supported so i could do the fuselage sides. 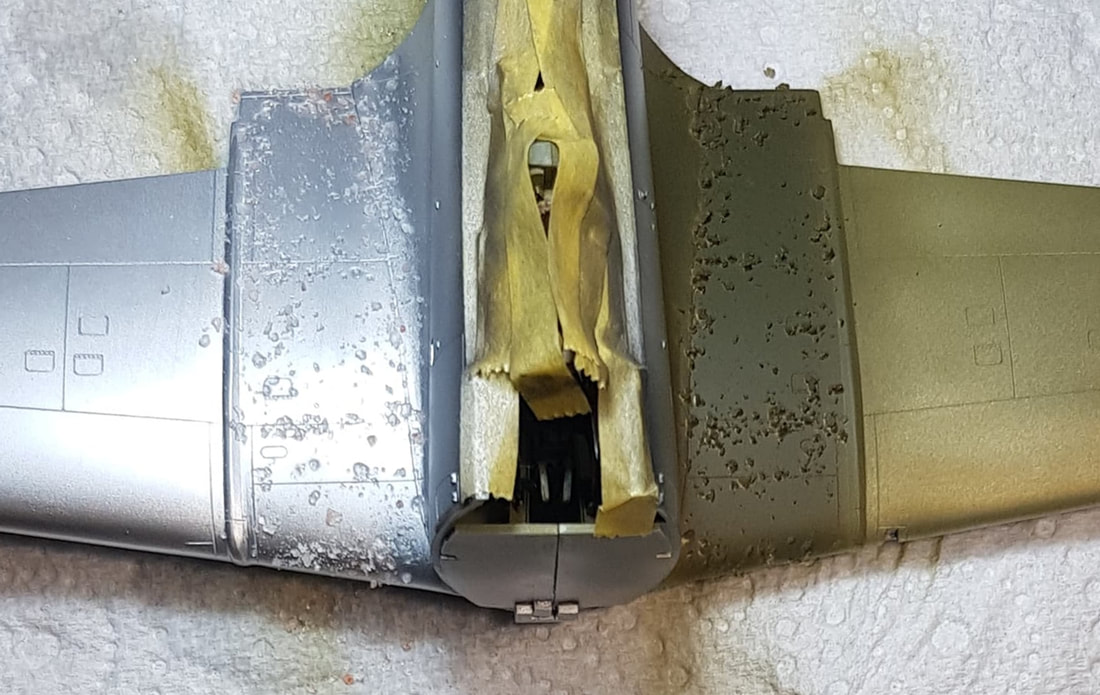 The reveal. I let it dry for a good couple of hours before i used a cut down brush to remove the salt, just working away at it slowly. The Vallejo paint seems really solid though and the only paint that came away was where the salt had been. This reveal is total overkill but a lot of this chipping will be covered in the next layer, and if i ever want to do an old crashed or beached diorama i know how to go about it! 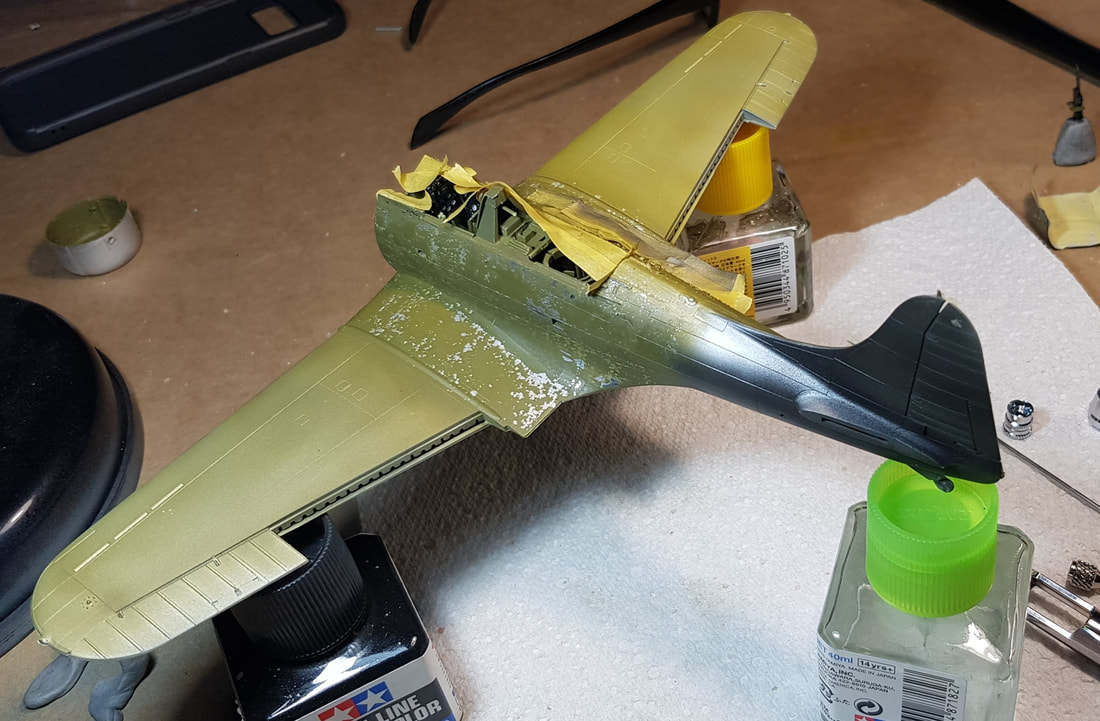 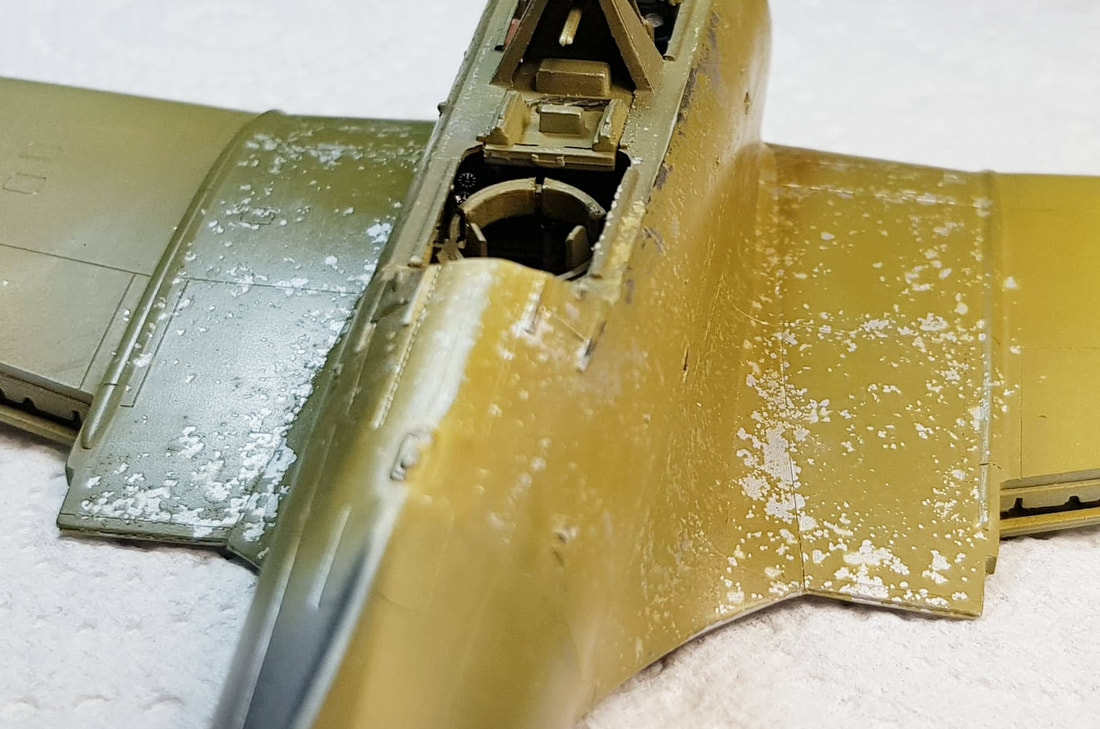 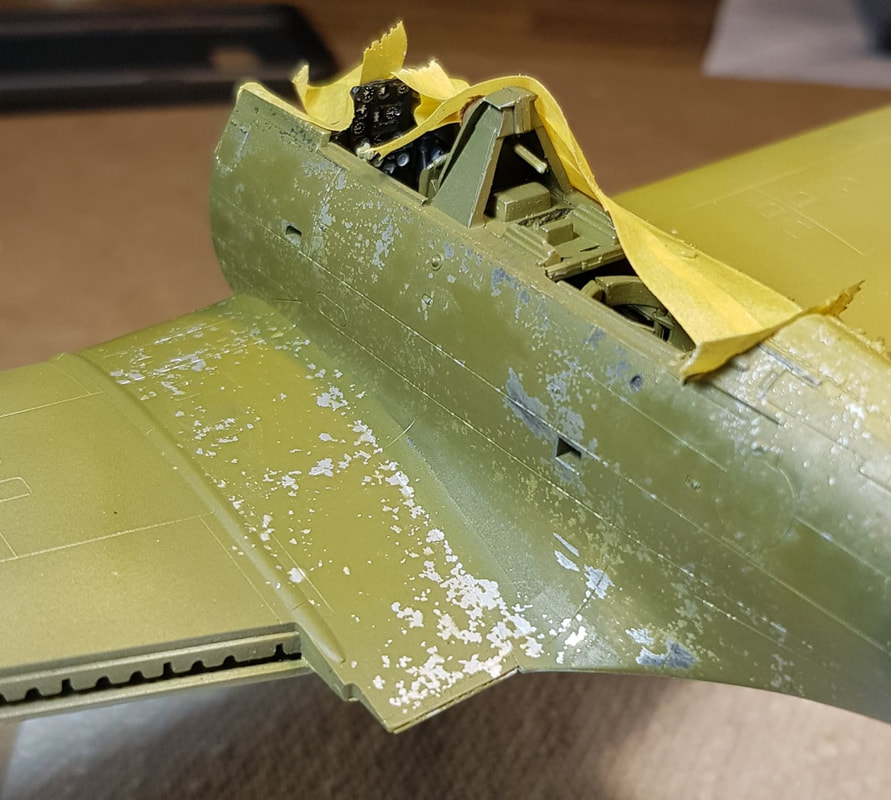 Layer two, more of the same except this time i tried to use the finer pieces of rock salt and attempted to get my salt placement better. The blue (Vallejo steel blue) was far too factory fresh and bright so while the salt was still on i lightened the mix with some white and medium blue to do some faded panel work. My leading wing edge salt placement was a mile off as it ended up too high, something to be aware of with my next chipping effort. 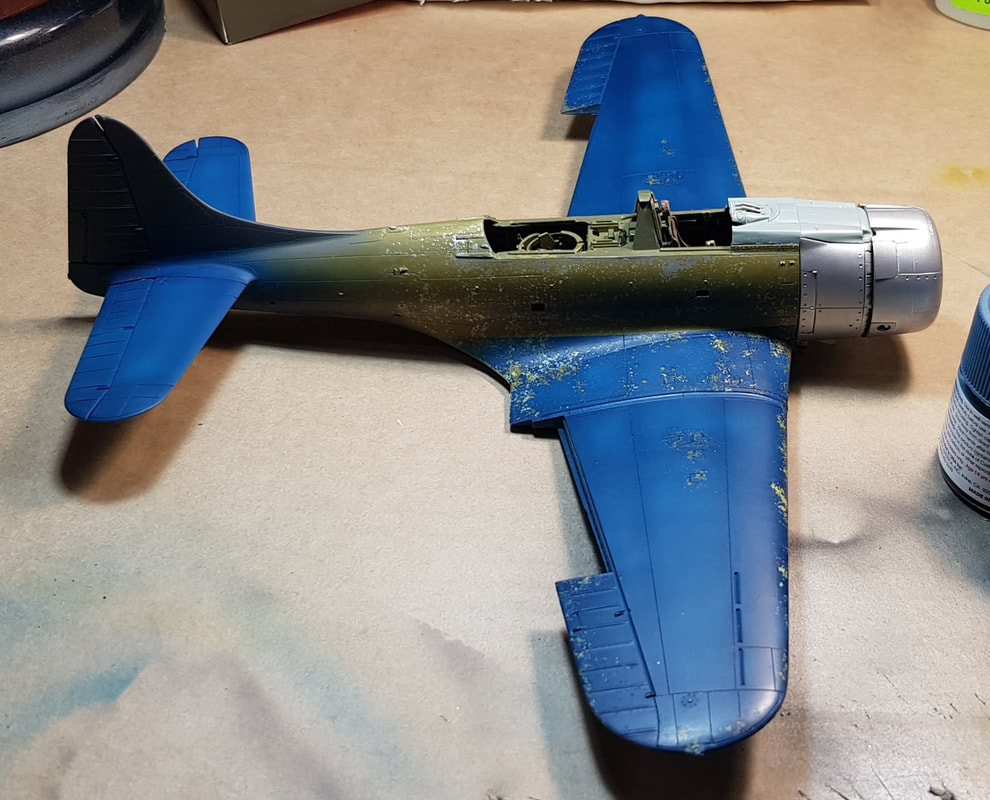 From here i needed to do the fuselage sides and complete the tricolour blue/blue/white scheme which was all a bit fiddly making sure the fuselage salt stayed on while spraying two different colours and camo scheme. As before the fuselage blues were lightened in areas with a lighter mix of the same colour, the rear tail section was cleaned up and the stripes were masked out, salted and sprayed..then desalted. In between waiting for salt and paint to dry i masked the cockpit with the supplied masking kit. The kit gives you two options, a five piece open canopy or two piece closed. 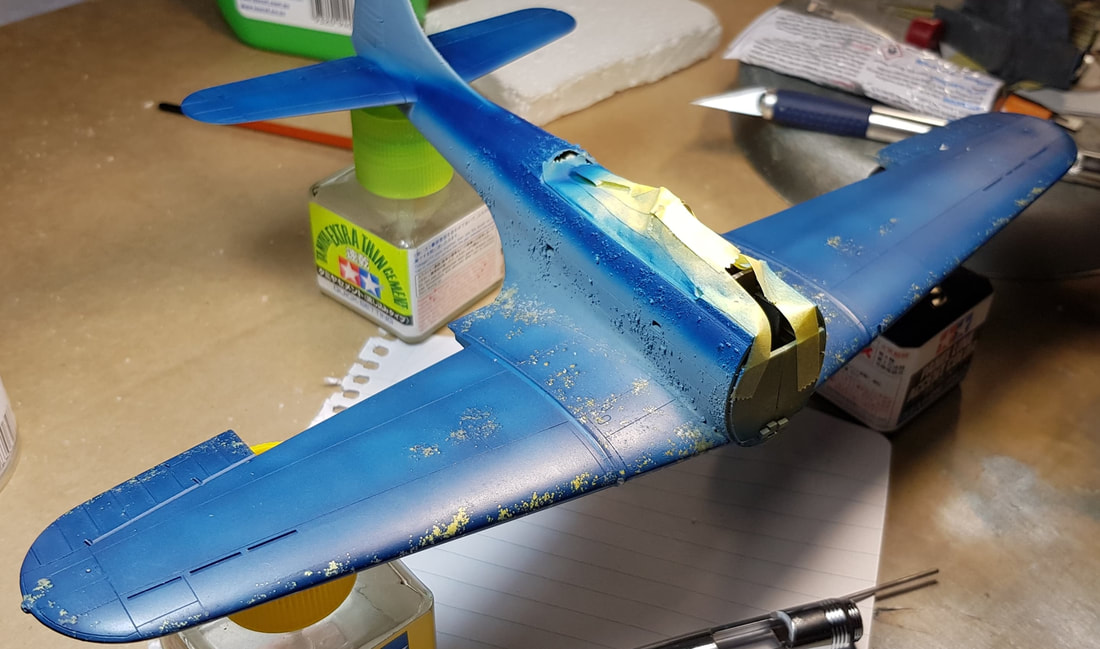 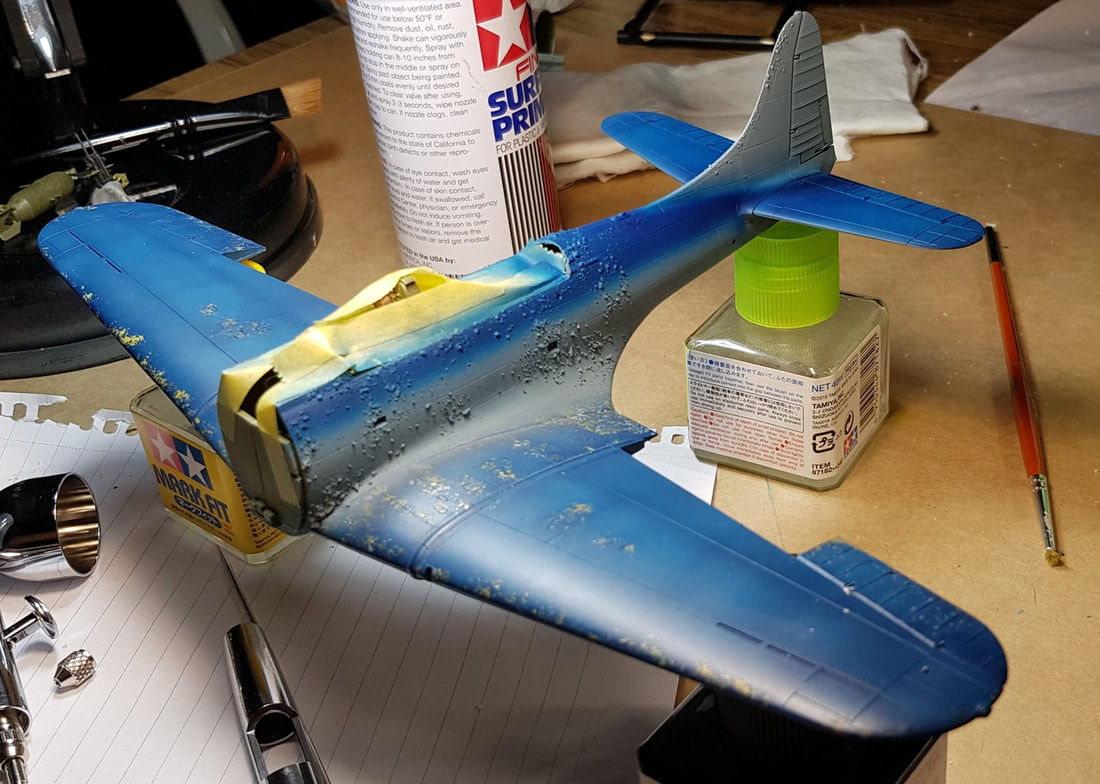 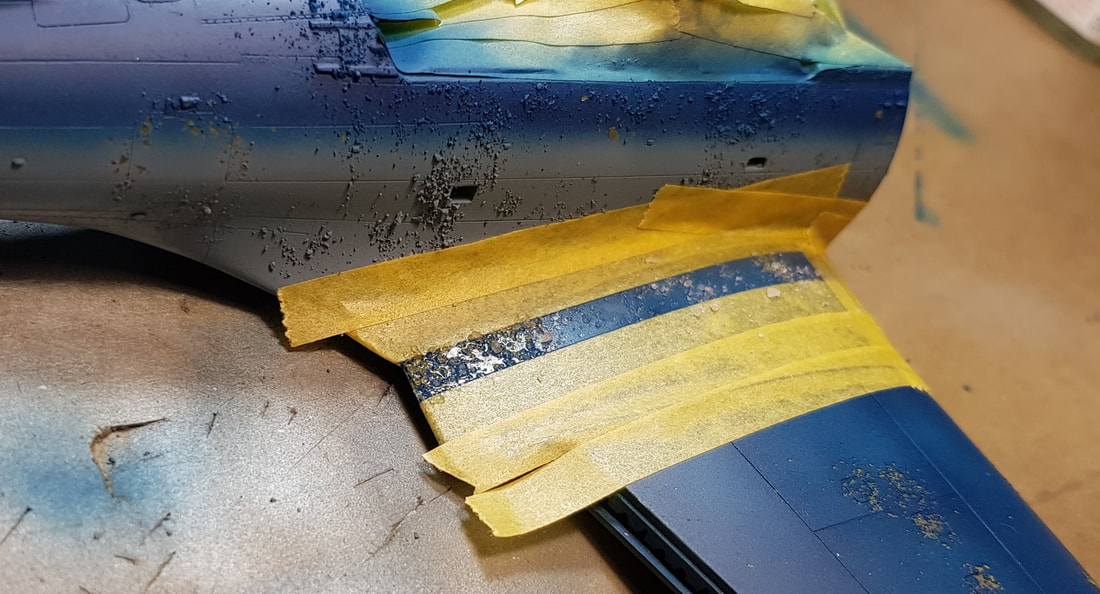 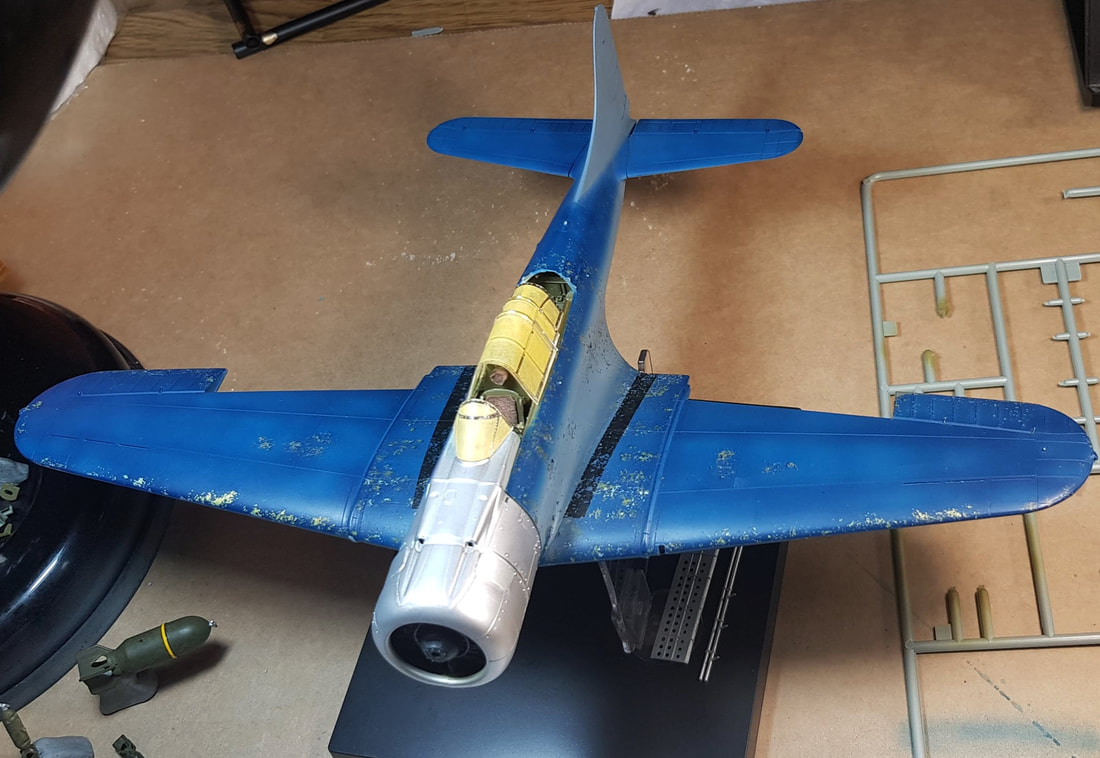 So that was good couple of days work all up and fairly happy with the results so far considering it's my first crack at the technique. Once i had let it sit overnight i rubbed the whole model down with a damp rag to remove any salt still hidden away under the paint and then gave it a god rub down with a dry cloth.

The flap mechanism is pretty bland but it mostly hidden anyway. All of the flaps fit well enough which was a nice surprise and the red should be a nice contrast up against the blues.